I stumbled upon an image this weekend showing the digital divide of the world. It graphically shows what parts of the globe have access to digital technology, measured through IP address locations. Showing the layers between high and low-density areas in relation to internet access is powerful. I once heard someone say that Africa is no longer called “the dark continent” because of poverty or skin color, but because of the widespread lack of access to electricity and internet connectivity. Now, whether or not that makes the name any less offensive is trivial, but this image is telling in bringing that statement to life. 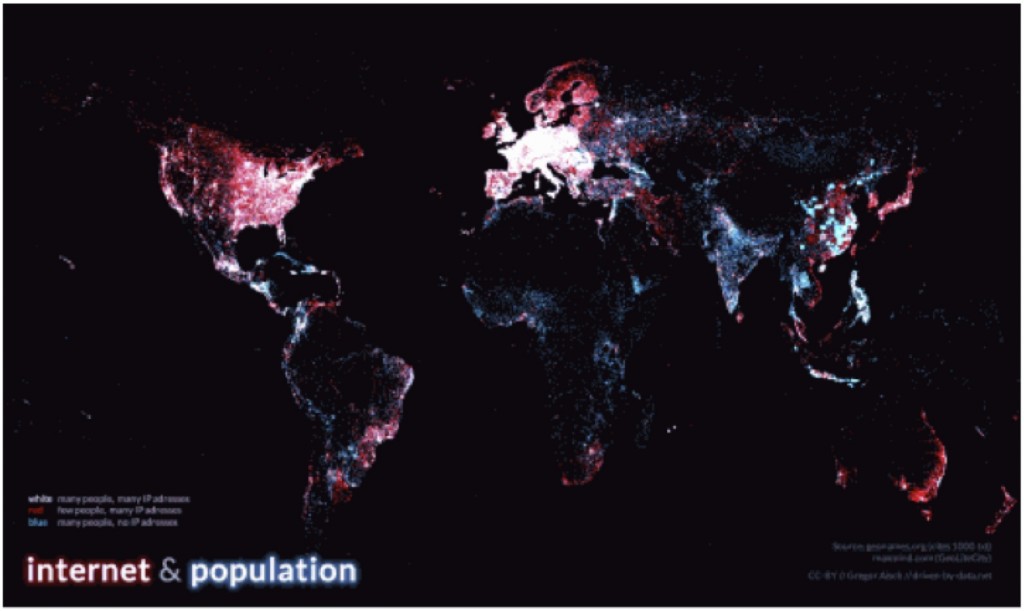 The debate rages about the best way to hurdle this divide and the moral obligations in doing so. I have read some interesting suggestions, but none so interesting as Paul Romer’s proposal for charter cities. He argues the need to establish “special reform zones” in impoverished counties where these countries offer a parcel of land to the international community for building up essentially the next Hong Kong. He believes that this will initiate cross cutting governmental partnerships, and more importantly, bring people together to work under ”updated rules”. Relating to electricity specifically, he argues:

In too many places, weak or outdated rules hold people back. Some rules limit who can sell power, so electricity is expensive. …Others make it difficult to start a business or open a plant. Because of this, firms build new factories not in places where the need for work is highest, but in places where electricity is inexpensive, people and property are safe, and doing business is relatively easy.

To accomplish this vision, he must unite a host country, a source of people, and a third nation to guarantee finances and upholding rule of law. In working together with a number of nations Romer believes that this has a two-fold benefit for the world. First, it offers people an opportunity to move themselves out of poverty by moving to work in a city. Second, it will create another port for trade and commerce in less utilized parts of the world, expanding financial networks and job opportunities.

Romer has raised eyebrows with his new way of thinking, gaining both praise and criticisms for his ideas. Somewhere between calling him a colonialist with only pseudo-scientific ideas and a forward-thinking genius; it must be appreciated that at least he is thinking outside of the box.

Personally, I do not agree with his ideas towards fixing the technology divide, but I do not necessarily have any better solution to offer. However, I know this will not be a problem that can be fixed with short-term solutions or large-scale overnight reforms. Now, I do not believe that the lack of access to technology should be a problem overlooked, but we must not throw incapable reforms at the problem.

I believe that access to technology is a human right, and one that has clearly not reached a good portion of the world. After the first step of acknowledging this right, the hurdle begins when debating tactics of expansion and execution. It is not enough to simply hand out computers, but must be superseded with education and access to electricity. These inherent institutional constraints must be the metaphorical egg that is addressed before the chicken (ie technology) is brought in. While this is the fundamental problem that Romer is trying to address, there must be a better way to motivate international governments to make technology available to its people without building large-scale cities from abandoned swaths of land.