Evelyn Beatrice Hall, a writer who published a biography on philosopher Voltaire in 1906, concisely summarized Voltaire’s beliefs with the now widely recognized phrase “I disapprove of what you say, but I will defend to the death your right to say it.” The Founding Fathers of the United States also seemed to take Voltaire’s teachings to heart. In the 1st Amendment of the Bill of Rights, they granted freedom of religion, press, speech, and the right to assemble. Many of us have taken these as inherent and unalienable rights that are always granted to us. But in light of recent events, I must question whether these ‘rights’ are actually just privileges that can be revoked.

As you may have guessed, I am referring to the police violence that has occurred at UC Berkley and UC Davis over the past few weeks. While I have discussed my qualms with the Occupy movement in another protest, the actions that the UC Police has carried out over the past fortnight is morally reprehensible and unacceptable.

On November 9, protestors at Occupy Berkley were beaten with batons. Many other students on University of California campuses, UC Davis included, banded together in support of Berkley. Students at UC Davis responded with a rally in which they planned on expressing their concerns via non-violent civil disobedience. Linda Katehi, Chancellor of UCD, ordered students to remove tents from the quad. However, since the protestors refused to move, Katehi ordered the UC Police to order the police to move them. What happened next was horrifying. 50 students linked arms and sat peacefully on the ground, posing absolutely no threat to the police. Nonetheless, the 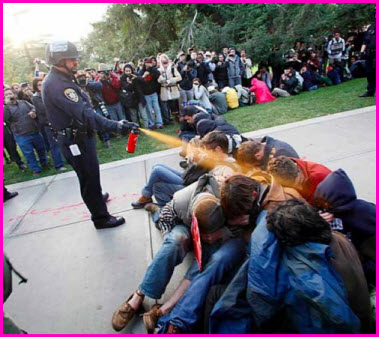 campus police officers, dressed in riot gear, casually pepper sprayed them in the face. This move was eerily similar to policemen hosing down protestors during the Civil Rights Movement. When I first saw the video of the brutality, I could not believe that our country could still be so barbaric. I really hope that not long from now, images such as the one on this article are viewed as shameful reminders of how our authority figures can oppress us.

I understand that the students were told to leave. But the response by the administration was excessive. Policemen should not have the right to physically harm peaceful citizens who are exercising their rights. Perhaps the administration can justify allowing the police to arrest the students, but they cannot allow the police to inflict bodily harm without provocation. In January, President Obama stated:

I want to be very clear in calling upon the Egyptian authorities to refrain from any violence against peaceful protestors. The people of Egypt have rights that are universal. This includes the right to peaceful assembly and association, the right to free speech, and the ability to determine their own destiny. These are human rights. And the United States will stand up for them everywhere.

This sentiment is admirable. Great things can happen from non-violent expression. Peaceful politics gave India independence, made the Civil Rights Movement productive, and ended apartheid. But actions speak louder than words, and it seems as if we have begun to lose this fundamental right to peaceful assembly. It is time to prevent future violations of this right and for those who have violated it in the past to be held responsible.