On September 25, Wangari Maathai, the environmentalist, politician, human rights activist and Nobel peace prize died in Kenya. She was 71 and left a big legacy behind 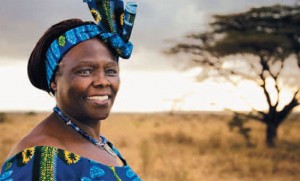 her. She is best know for founding and leading and environmental non-profit, the Green Belt Movement.

The Green Belt Movement (GBM) advocates for human rights and supporting good governance and peaceful democratic change through the protection of the environment. It’s success as a poverty alleviation and environmental organization gave it quick international recognition.

GBM is different from many environmental NGOs and non-profit organizations because of the role it played in Kenya’s politics. Wangari Maathai always had engaging opinions about politics. She was clever enough to use GBM media power and recognition to mobilize many citizens and lead the political change that she wanted to see in Kenya.

She became a leader of the movement against president Daniel arap Moi of Kenya. The pro-democracy group she was part of was the Forum for Restauration of Democracy (FORD).  In January 1992, she was arrested accused of conspiracy but released soon afterwards because of the international attention she received. Would it not have been for the Green Belt Movement’s international presence, her name would not be as known and her release would have been less probable. Her organization played a key role helping her to change the political arena of Kenya.

Another great example of how the Green belt movement became a strong advocate of democracy and political reform in Kenya is in 1993. Ethnic conflicts rose in Kenya. Maathai believed the government, who had warned of stark consequences to multi-party democracy, had incited them. Maathai traveled to encourage people to cease fighting. With the Green Belt Movement she planted “trees of peace,” but it wasn’t long before the government opposed her actions. Planting trees for peace” was a truly innovative strategy to promote political expression and reduction of violence. This is a one of a kind type of activism and one that Maathai should be remembered for.

She and her organization continued to fight for democracy and sustainability. Her militancy against land grabbing and environmental degradation were persistent. By 1999, Maathai and the Green Belt movement were still doing what came naturally: planting trees. Maathai’s activities made the authorities uneasy. GBM and Maathai attempted to plant replacement trees, felled by real estate developers whose private security guards were reportedly behind an attack that left Maathai’s head gashed and many of her supporters injured. Even after these attacks the organizers of the GBM were conscientious enough to still frame their beliefs in a non-violent way.

Finally, on December 2002, the Rainbow Coalition defeated the ruling party in Kenya, African National Union. Once the political framework of Kenya changed, Maathai was able to do even more. She was subsequently appointed as Assistant Minister for Environment, Natural Resources and Wildlife in Kenya’s ninth parliament. She was the first woman with that post. After this, the Green Belt Movement became less active in politics. By this time the role that their leader wanted to achieve in politics had been accomplished.

Wangari Maathai’s life is important not only because of what she accomplished as an environmental and social justice activist. She is important because of the way she accomplished them, acting both as an NGO and with (or at times against) government. She knew that to gain political attention, she first needed serious civic engagement. Through her organization, she was able to raise strong political discontent and have an impact in her country’s democracy. She fought for democracy in creative ways. After all, who else but her and the GBM would’ve thought about “planting trees for peace”? This is a lesson to learn for present and future political reformers.

Her achievements as a human rights advocate, as a promoter of sustainable development and as environmentalism lead her to become the first African woman to win the Nobel peace price in 2004. Her activism was not purely environmental as her approach was holistic; her environmental fight was also a fight to protect human rights and to eradicate poverty.

Because the Nobel Peace Prize were just announced to three women, I would like to pay tribute in a series of post to three woman Nobel Peace prizewinners that have had permanent impact in our society. Wangari Maathai was one of them. The second one will be Rigoberta Menchú (Peace Prize in 1992). Both women were activists; they were women representing a different part of the world (Africa, Latin America respectively) for the first time. They both had experience with repression, violence, and violation of human rights but fought determinedly for their ideals. They are an inspiration. Check out next week’s post to learn more about Rigoberta Menchú.