I remember being a kid and going to the mall with my mom to pick a birthday gift. Did I want the new Madden game or the new Fifa game? The Barry Sanders jersey or the Chauncey Billups one? I remember agonizing over this decision, worrying that I’d make one I’d regret at a later date.

According to research conducted by professors Travis Carter and Thomas Gilovich that was published in the Journal of Personality and Social Psychology, this fear of regret is not unique to me. They found that when people chose between various material goods, they often continued to compare the good they chose to their other choices and often regretted their decision. Conversely, when people chose to undergo a certain experience over another experience, they tended to be satisfied with their choice.

Carter and Gilovich’s research is really interesting because it makes me wonder if we correctly prioritize our preferences. Many of us are always looking for ways to update our wardrobes, get the top-of-the-line TV’s and phones, and get the newest LeBron’s or Kobe’s to lace up and impress our friends with the next time we play basketball.

As Gordon Gekko said in Wall Street, “greed is good” (or at least it can be). Unnecessary purchases drive our economy. Greedy producers provide desirable goods to us greedy consumers, and in turn, many people get food on the table, clothes to wear, and a roof above their heads. But are these purchases really what make us happy?

Life tends to offer enough stresses as it is. Do we need to create even more in our life because of our inability to choose between a 35’’ flatscreen and a 45’’ flatscreen, or Bose speakers and Sony speakers? According to Carter and Gilovich, we’re going to end up comparing these goods down the line regardless of what we chose and continue to regret the decision we made.

Psychologist Barry Schwartz goes even further than Carter and Gilovich in his TEDTalk “Paradox of Choice.” During the talk, Schwartz argues that the consequences of a consumer having an expanded choice set are more dire than just being unsatisfied with 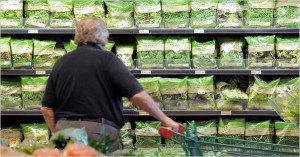 their decision. He states that while you would think more choices would be better for a consumer, they actually lead “paralysis rather than liberation. With so many options to chose from, people find it very difficult to choose at all.”

This paralysis is not limited to someone choosing between different material goods. Schwartz cites a study in which researchers found that the more voluntary retirement plans employers offered their workers, the less likely workers are to choose a plan because they were so worried they’d make the wrong decision. By having so many options, they are no longer able to make choices that would be beneficial for them.

Carter, Gilovich, and Schwartz’s research has political and social implications. Many libertarians such as Republican presidential candidate Ron Paul believe that having choices is necessary for individual liberty. Thus, they oppose governmental interference in individual’s lives and most taxes. While I agree that it is important to have some level of freedom, perhaps we cannot always make the best choice for ourselves. Complete autonomy to decide what to do with our resources is a responsibility that we don’t want and actually hurts us.

But what if we gave some of our choices and opportunities away to others? If some of what enables us to make all of our choices was shifted to people without these choices, we would not only help their lives but we would also help our own lives. Choices usually develop as a result of having wealth. It is unfortunate that what plagues so many people in the Western world is material affluence. In most other places, problems arrive from people having too few choices, not too many. Perhaps income redistribution would make everyone better off.

All income will never be completely redistributed, so people are still going to be burdened with tough choices. I propose that we all look at this research and reconsider the way we spend. While we obviously occasionally will continue to spend money on goods we don’t necessarily need, next time we’ve saved up a decent amount of money and have time for a break, we shouldn’t be so quick to go to the mall and buy the new iPad. Think about things you’ve always wanted to do but never have. Check out kickboxing classes and hotels in the Alps, tickets to baseball games and charities that you’d like to help out. Self-doubt is a common feeling that we all experience. But chances are, when you’re at kickboxing class, you won’t wonder what’s going on at yoga, or if you finally took your dream vacation to the Alps, you won’t be wondering on how it would have been if you’d gone to Beijing. Money spent on these types of experiences, with the people you care most about, is money you won’t regret having spent.