El sistema (The system) is a music program in Venezuela (and in some parts of the U.S) that trains poor kids to be musicians. The program started out in 1975, after economist and musician Jose Abreu gave classical music lessons to 11 children in a Venezuelan 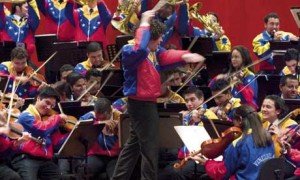 garage. Those music lessons kept the children out of violence and drugs. Children became seriously engaged and passionate about the music they were learning and had an opportunity to do what they loved.

After noticing the positive impact music was having in the children’s lives, Abreu enlarged the school and gathered more support in order to reach as many poor children as he could. The program now teaches music to 300,000 of Venezuela’s poorest children. Children learn to play instruments and they become part of an orchestra. The Venezuelan government largely funds it. The education is free and the schools are located near the poorest neighborhoods.

El sistema has been succesful in many ways. First of all, the program has proven to be an educational alternative for children that too often lack good education and good opportunities. By offering them education in music, the program has given them an opportunity to become good at something that they didn’t have access to.  Since many of the children come from very poor households, families cannot afford to pay for extra-curricular activities. The chance to have free musical education has kept many children out of the streets, where they are more susceptible to falling into crime, gang violence, or drugs. The program also helps prevent the poverty trap by pushing the children to attend the school and gain more education. They also learn a new skill set that will probably give them more opportunities in the future (see an article here about the benefits of music education).

What’s more, one important thing that I think that the program has done is that it has “democratized” the access to classical music. Classical music is often perceived as something that only elites can access and understand and as not part of Latin American popular culture. Therefore, before El Sistema classical music was “exclusive” in Venezuelan culture, not because children had a lack of interest for classical music but because they lacked the opportunities to have access to it. The program defies the social structure in which “classical music” is something that the educated and the cultural elite had access to. Now, the children that are part of “El Sistema” understand and talk about Mozart and Tchaikovsky, they can compare Schubert to Bach. I think that making classical music “inclusive” to the whole of the Venezuelan society has been one of the major successes of the program.

Finally, the program gives children the opportunity to nurture a sense of belonging and of community. They are not only learning music, they are also learning to interact and become part of a strong community. The school is not about creating the very best and the most competitive musicians; it’s focus is on creating a friendly community. In an orchestra, or in any musical group, you have to be in constant dialogue with the rest of the group, attend formal rehearsals and performances. When you are part of an orchestra, you become part of a community with a common goal: a community that plays music you love. When you perform in front of an audience, you have to be in harmony and in tune with the rests of the musicians. I think that this creates a feeling of security and hope.

The children now spend their time doing something they love; it gives them an opportunity to use their time in meaningful ways. This is why Abreu can say, “music fills their souls”. The program is demonstrating the power of ensemble music to dramatically change the life trajectory of hundreds of thousands of a nation’s youth and to transform the communities around them. It is a program that is creating sustainable change. It’s making classical music inclusive, builds a sense of community, and prevents drug use and violence in the Venezuelan society.

This program is a great example of how creative methods can help solve social problems. And that sometimes social change is about giving opportunities and hope. Children didn’t have access to classical music. By giving them the opportunity to do so, they are now seriously committed to a cause, to a project. Maybe it’s because of this deep commitment that the orchestras (mainly the Simon Bolivar Youth Orchestra) of El Sistema have gained international recognition and why the program by itself has won many awards (such as Spain’s Prince of Autria’s Award, TED prize). A documentary is coming, for those who want to learn more.

Julia Naime is a reaserch intern at the SISGI Group. Her research areas are Sustainable Development, International Development and Environmental Policies.