In the past few weeks, I’ve written about how difficult it is for for a nonprofit organization to successfully address more than a single issue in a sustainable way. Complex problems – like poverty, for example – can rarely be solved by fixing just one aspect, which makes it difficult to make sustainable change. One organization that has 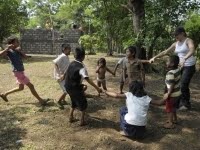 been successful with its multidimensional plans and goals, however, is Bridges to Community – a nonprofit that focuses on community development in Nicaragua. Three years ago, I went on a trip to Masaya, Nicaragua with Bridges. The goal of my particular trip was to build houses for two families that – like most members of the community – were practically living in a “home” of sticks, tarp, and dirt. While I may be partial to the Bridges’ efforts to build houses, I’m actually most impressed by the various other work that the organization does. Bridges addresses multiple issues of Nicaragua, which leads to sustainable and progressive development in the communities.

I think the reason why Bridges is so successful is their community involvement. They don’t just travel to Nicaragua, build a house, and leave – they do a lot of work with members of the community so things continue to improve long after individual trips are over. Their involvement ranges from improving health and education to promoting economic development. But included in each of their initiatives is a way for local Nicaraguans to participate and help improve their own community. After all, there is only so much an outsider can do to solve local issues – without involvement from Nicaraguans, any initiative would fail. There’s simply no way to create sustainable change without the cooperation of the community the nonprofit is trying to help.

When we were building the houses, for example, there were about two dozen Nicaraguans who had been hired by Bridges to help us. Whether it was to help us mix cement, lay bricks, or cook dinner, the locals were given employment opportunities by the nonprofit. Additionally, Bridges hosts workshops that teach Nicaraguans valuable skills like arithmetic, literacy, and accounting that enable them to get a better job or create a small business. The nonprofit actually invests in Nicaraguans’ potential to be successful in a number of ways, including granting loans to local businesses with careful consideration. Many prioritize single mothers and empower women to create a small business out of their house (such as making baskets or clothing) rather than working in a factory or depending on a male partner. These loans have reportedly doubled the income of more than half of the recipients, which is obviously a remarkable success.

The other aspect of Bridges’ mission is to foster cross cultural understanding between Nicaraguans and Americans. Besides the language barrier (Spanish/English), these two cultures are practically two different worlds. My trip to Masaya was one of the most unique experiences of my life that I’m incredibly thankful for. Not only did I return to the U.S. with an appreciation for my flushing toilet and stable home, but I also  had a great respect for Nicaraguans. I was barely able to speak a word of Spanish, but we still managed to communicate without much help from the translators, and I learned how truly wonderful and kind the people of Masaya are. This brought a whole new element to the services Bridges provides – sure, they could simply hire a group of 20 Nicaraguans to build houses and that would surely help the community as well, but bringing a group of Americans to the country allows both cultural groups to learn about each other and foster a greater understanding. Additionally, we funded our own trip (plane fare, food expenses, etc.) and also the materials to build the house, so Bridges doesn’t lose money by having international volunteers do most of the labor. Bridges also partners with schools and religious organizations, which allows them to have a consistent amount of interested volunteers to travel to Nicaragua.

The key is that Bridges to Community uses the community to strengthen the community. It is so much more than just building a house – Bridges is helping to rebuild a community. By helping Nicaraguans build their businesses, learn useful skills, and have a stable job, Bridges enables them to improve their community in a sustainable way. This multidimensional approach allows the nonprofit to truly live up to its name and bridge a community struggling with poverty to one of progress, achievement, and hope for a better future.