An elderly Chinese farmer walks along a 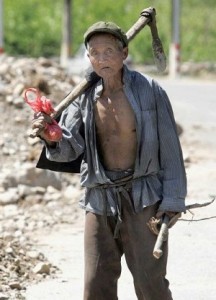 Beijing, CHINA: An elderly Chinese farmer walks along a road in the outskirts of Beijing 19 May 2007. The number of elderly Chinese people without family networks are a growing social problem in China, with the country’s modernization partly to blame, because old customs like the obligation to venerate and care for the elderly are breaking down, as millions of young farmers move to the cities in hopes of finding jobs, leaving their parents behind, many with little financial support. AFP PHOTO (Photo credit should read STR/AFP/Getty Images)