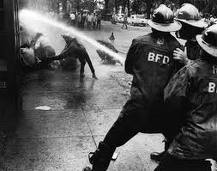 As we celebrate the 25th Anniversary of the MLK holiday, I have been reflecting on the work of individuals during the Civil Rights movement. The Civil Rights movement was a battle that included policy makers but was lead by those on the ground dealing with the injustice on a daily basis. It was individual people sitting in, facing hoses, angry crowds and lynch mobs that brought national attention to the South and the country. Their individual risk and voices brought monumental change. They picked up a sign for a cause they believed in, got out their house and marched.

If we were having this struggle today what would it look like?

With technology, (and the ways that awareness campaigns use social media) one could probably text or tweet to donate to a large campaign full of celebrities and policy makers. There probably would be large televised lobbying events in Washington and special events to raise awareness. The 24/7 news coverage would show the marching, the sit-ins, the shouting. That is if any of that still occurred…

Today, we read or hear about injustice from a ton of different media sources, post it on our Facebook pages, and tweet about it as a trending topic. But are we willing to risk, protest, or march to bring about equality in the country or the world? Are we so saturated with information and yet so disconnected, that the problems in the world seem beyond what we are willing to fight for?

The Civil Rights Movement was a people’s movement. Though there were celebrities involved (or created) over the course of the struggle, it was the every day person battling the policies, that slowly brought about change. They decided that they couldn’t stand back and just watch it continue.

If we look at other recent issues, individuals continue to jump up for the cause they care about (such as the March for Immigration Reform in 2010) and make a visible stand against policies they see as unfair. Like Civil Rights, the battle against Apartheid in South Africa was lead by individuals, and even children, marching through the streets, shouting for equality. As became apparent during the Iran Election Riots (where images and stories of on the ground protests were shared across the globe through blogs and social media) technology can even be used with traditional methods of change such as protests and marches.

We should always remember that it has been proven that a few people can join together with a few other people and change the world.

The Corporation for National and Community Service is asking for people to honor Martin Luther King’s Birthday as a day of service (MLK Day of Service). It is a good way to get started volunteering for a cause that is important to you. It is a great way to help bring change to a community near you.

But after that, why not honor Dr. King’s legacy every day, by choosing to not let injustice continue anywhere. The next time you see someone bullied or treated unfairly, speak up and defend them. 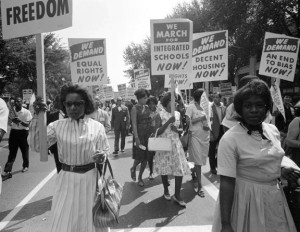 The next time someone makes a racist, homophobic, sexist or discriminatory joke or statement, stand up and call the person on their ignorance. And the next time you see an inequity in the world, do more than tweet, post on your Facebook page or talk about how awful it is with your friends. Find out what organizations and groups are working on that issue and pick up your sign and figuratively march. Be a part of the next movement that makes the world a better place.