Anne Mahlum is a runner. Always has been. And in the early mornings of spring 2007, you could often find her running the sidewalks of Philadelphia, before heading to work for the day. On her runs, she would pass apartment buildings, businesses, and even a homeless shelter, which was just a couple blocks away. 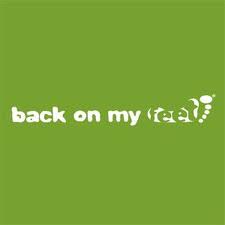 She would run by the shelter often, and pass by without a second thought. However, that May everything changed. The men standing outside of the homeless shelter began waving to her during her daily runs. So she waved back. They began to say hi. So she said hi back. And then the thought dawned on her, “Why do I get to be the runner, and they get to be the homeless guys on the corner?” And that’s where Back on My Feet began.

Struck with inspiration, Anne decided to call the shelter and tell them of her desire to start a running club. Her unusual request was initially met with skepticism, and wary “don’t get your hopes up”. Yet despite the underwhelming response, just a week later, Anne received an email from the shelter with the names of nine men and their shoe sizes. Anne had found her runners.

The Sunday before their first run, Anne arrived at the shelter with some shoes, running clothes, and a Dedication Contract. Among the contract clauses? All participants were required to show up for the 6 a.m. runs three times a week, on time, with the utmost respect for themselves, and support for their teammates. Anne didn’t care about the homeless stereotypes. She expected pure excellence – one hundred percent dedication. And the men gave it to her. They were showing up for the runs every single day, on time, and with a positive attitude. They were there not because they had to be, but because they wanted to be. It was almost like these men had simply been on that corner, waiting all this time, for someone to come along and believe in them.

Running doesn’t discriminate… doesn’t matter if you’re white, black, rich, poor, homeless or not, it can make you discover all the things you like about yourself.” – CEO Anne Mahlum

Back on My Feet has now expanded to ten chapters nationwide, with locations ranging from Atlanta to Austin to Indianapolis, and with another slated to be opening in Los Angeles by the end of this year. The process itself is simple. First, a chapter partners with a local city facility, be it an emergency shelter, mission, or halfway house to enlist interested participants. During the initial Orientation Session, all participants sign a dedication contract, goal sheet, and evaluation survey. Running 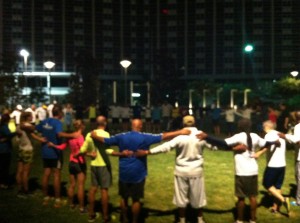 teams are then formed, combining both individuals who are experiencing homelessness (the residential members) and other community members (volunteers). The teams run together at least three times a week (Monday, Wednesday, Friday) and if a residential member participates in at least 90% of runs their first month, they are allowed the opportunity to move onto the “Next Steps” phase of the program.

In the “Next Steps” phase, all residential members meet with a Back on My Feet staff member in order to access their current situation, and to determine the necessary steps to transition them into a more independent lifestyle. The goal is to provide members with the financial backing needed to eventually move them into a more permanent housing situation. Since its start, 46% of Back on My Feet’s residential members have gained employment, independent housing, or both.

While Anne had no background in homelessness, or even social work for that matter, she quickly discovered what so many others were missing. The solution to homelessness isn’t just about pouring more federal funding into homelessness programs. It’s not just about creating more homeless shelters. It’s not even about donating more canned goods and food items to food pantries. It’s about addressing more than just an individual’s physical, tangible needs. It’s about focusing on the intangibles.

Anne quickly came to this realization herself as she marked down the number of miles run by each individual each day. As she recorded the mileage, all of the men would hover around her, peering over her shoulder to see their results. They weren’t interested in the number itself. Not really. They, like everybody else in this world, were simply searching for validation. For validation of their own self-worth. Over time, Anne realized that everybody involved with the program – whether they were housed or homeless, male or female, black or white – were all searching for the same things. Everybody was searching for love. For acceptance. For the simple acknowledgement that they, as an individual, were important.