Have you ever heard of the school to prison pipeline? It’s likely you haven’t. Because it’s not something that receives a lot of publicity outside of the areas it affects. But it should. Which is why I decided to write this article today. I want to shine some light on something I believe is a huge issue for today’s society.

Think about traditional discipline you see in schools: a scolding from a teacher, a trip to the principal’s office,

detention, MAYBE a suspension if you’ve done something really bad. But that’s all it ever is. It’s always contained within the school. You certainly have no reason to fear police action unless you broken an actual law instead of simply a school rule. However, that’s not the case everywhere in the country.

Some schools take a much more extreme approach to discipline. They respond to things as little as dress code violations, profanity or disrespect with actual police action. In certain school districts, children are automatically arrested if the school refers the students to the police. No questioning the situation. No investigation by the police. AUTOMATIC arrest. As a result, children get records in the juvenile system. And often eventually end up in juvenile detention centers or jail. All for breaking school rules. This is what we refer to as the school to prison pipeline.

This is bad enough in itself; however, there are other issues creating this situation beyond extremism in sentencing. In many places, this has a very clear racial component as well. In Meridian, Mississippi for example, the Department of Justice conducted a study from 2006-2010 that resulted in some very troubling findings. The investigation demonstrated that black students were systematically treated more harshly than white students. In fact, 100% of the students referred to law enforcement or expelled were black even though they only make up 86% of the student population.

In response to these gross injustices, the Department of Justice issued a federal decree last month ordering the 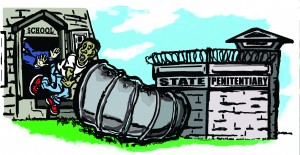 town to dismantle this pipeline. It is unclear whether this decree will have the necessary strength and political force to end these practices. However, it is an important step in the right direction that the DOJ has come out forcefully against the practices happening in Meridian. We may have to wait to see how things will play out in Mississippi. But I’m encouraged that people are doing something. And I mean a lot of people. Because the DOJ is not alone in acting against the school district in Meridian. It is also being supported by Meridian residents, the NAACP and the Southern Poverty Law Center.

DOJ involvement means the federal government is taking action to change the racist practices in Meridian, Mississippi. Which is a huge breakthrough for the people working to end the pipeline. But this movement started small like any other. It started with one person standing up and saying “this isn’t right” and others standing with them in agreement. They knew that prison shouldn’t be associated with standard disciplinary practices in schools. That “zero tolerance” policies shouldn’t be considered legitimate school code. And that children should never have to fear police action for a simple dress code violation or for skipping class. They KNEW the school district needed to be stopped from manipulating the system to create this illegal and racist pipeline. Happily,it looks like it will be here. But Meridian isn’t the only place these practices exist.

Take a look at your own community. See if something similar is taking place where you live. If so, be the voice that starts the movement. And help bring it to an end. Things like the school to prison pipeline must be brought to a stop. Support the DOJ in its efforts to create equality in schools. Make sure children are educated. Not incarcerated.