The Coronavirus crisis has sharpened existing disparities along lines of race, class, industry, geography, and so much more. At the onset of the pandemic, much was made of the widespread trend of people – especially the most wealthy and mobile Americans – looking to “flee” cities in favor of less dense and consequently more rural areas. To the extent that such migration occurred, it necessarily meant that existing rural health resources would be tasked with caring for a greater population than they were designed for once the Coronavirus inevitably spread to rural America. This begs several questions:

Let’s start with the first question: did people move from urban to rural areas during the pandemic? According to research published by the Cleveland branch of the Federal Reserve, there was a measurably large out-migration beginning in the first quarter of 2020, continuing at least through the end of the year. However, an even stronger driver of changing net migration was actually a decline in the number of people moving into urban areas rather than an increase in the number moving out. The changing population trends were most pronounced in high-income neighborhoods, among renters as opposed to homeowners, among people younger than 65, and in metro areas with populations greater than 2 million. Conversely, people over 65 and those living in small and mid-sized metro areas with populations between 50,000 and 2 million had only a slight increase in out-migration.

While it remains unclear how long such population trends will last, they nonetheless raise concerns for non-urban areas’ preparedness. This brings us to our second question: how is local public health in the US funded, and how has it been impacted by the pandemic? According to a review published by the National Opinion Research Center of the University of Chicago, public health agencies generally receive the greatest share of their funding from local sources, “followed by federal and then state funding”. This local funding comes from a variety of sources, but sales taxes are perhaps the most worthy of our attention in this case.

Even when times are good, sales taxes are generally considered the most volatile source of local revenue due to the geographic mobility of consumer dollars, as well as variability in spending according to seasonality and changes in employment and incomes over time. They were bound to be devastated by the pandemic in virtually all localities. Few moments in US history compare to the initial months of the pandemic, during which entire industries and categories of spending (particularly entertainment, travel, retail, and dining) were not just diminished but brought to a complete halt. With this in mind, sales taxes are an important indicator of a county’s financial standing and ability to respond adequately to a public health crisis. 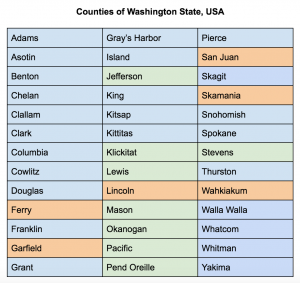 So how have changes in sales taxes varied between urban and rural counties? The US Census Bureau has a useful list, updated after each decennial census, of all counties in the US, with each designated as Mostly Urban, Mostly Rural, or Entirely Rural. Using this list, I focused on the counties in Washington State, which are listed below and color-coded according to their rurality designation. Counties highlighted in blue are Mostly Urban (less than 50% of the population lives in rural areas), whereas those in green are Mostly Rural (between 50 and 99.9% of their populations live in rural areas), and those in orange are Entirely Rural (100% of the population lives in rural areas).

Next, County-level data from Washington’s Department of Revenue on taxable retail sales for each county were compared. The available data include the number of taxable sales and the total taxable spending that occurred in each county. I reviewed this data for the years 2018-2020. This data is published quarterly, and since the 4th quarter of 2020 has not been published yet, I only compared the first three quarters of each year. The following graphs show trends in the taxable spending that occurred in the first three quarters of 2018, 2019, and 2020, separated by rurality.

Given this, we can move on to the 3rd question: do rural populations differ from urban ones in any ways that might put them at greater risk of harm from the virus? According to the US Centers for Disease Control and Prevention, “More than 80% of COVID-19 deaths occur in people over age 65;” as such, age has been deemed a major risk factor since the start of the pandemic. Using data from the US Census Bureau’s 2019 American Community Survey 5-year estimates, the proportion of the population over age 60 was determined for each county in Washington and grouped by rurality. In Mostly Urban counties, 20.75% were over age 60; in Mostly Rural counties, 32.62% were; and in Entirely Rural ones, 36.86% were. Comparing this age distribution across the urban-rural spectrum alongside the drastic changes in sales tax revenues accentuates the precarious financial situation of Entirely Rural counties in Washington, as rural counties with generally older populations have fewer resources with which to respond to the virus.

Since the outset of the pandemic, the economic effects of COVID-19 have been inseparable from its public health effects. While local revenues in Washington were diminished statewide, Entirely Rural counties were the most heavily impacted while also tending to have the most vulnerable populations. Future research should consider the nuances within each category of rurality, contextualized to the social diversity of Washington; for example, Entirely Rural counties consisting primarily of tribal lands as opposed to those that are not, in order to examine the geographic impacts of COVID through a racial justice lens. Furthermore, the economies of many rural communities often depend on only a handful of industries, so considering the outcomes of tourism-led economies to those of agricultural or manufacturing-driven ones, and so on, could further enrich our understanding of the disparities of the pandemic’s impacts. 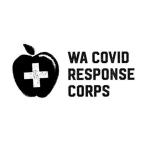 Paul McCormick is an AmeriCorps Washington COVID Response Corps member serving as a Food Access Associate in United Way of King County. Paul is helping to address food insecurity issues exacerbated by the pandemic to create a lasting impact on the community.