English author Edward Bulwer-Lytton once stated, “the pen is mightier than the sword”. An act as simple as writing has the power to influence people, sway opinions, and forever change the course of history. This centuries-old adage has shown itself to be true time and time again. Sometimes it is referring to something as powerful as a declaration of a war. However, it can also hold true for the little things. Persuading people to vote. Improving the environmental conditions in one’s community. And in Martha Payne’s case, reforming the school lunch system.

Nine-year-old Martha Payne was unhappy with the school lunches being served at her local primary school in Scotland. They left her hungry, unfulfilled, and routinely unsatisfied. What’s a girl to do in such a situation? Some kids might have gone to the Board of Education. Most would do nothing. 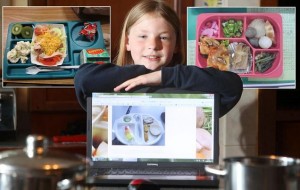 However, Martha took to the blogosphere.

With the help of her father, Martha started a blog called NeverSeconds, which chronicles the school lunches at her primary school on a day-to-day basis. She profiles every lunch, giving a “Food-o-meter” rating for the taste of each meal, also taking into consideration a health rating. In addition, she keeps track of the cost, number of mouthfuls taken, and in typical primary school fashion- the number of pieces of hair in her food (luckily, none since she started blogging!)

School lunch problems aren’t limited to Scotland. School districts in the United States also have problems aplenty. Many school districts struggle with providing cheap and healthy school lunches on a daily basis, both of which Martha have highlighted in her blog. While portion sizes might differ internationally, problems with quantity, quality, and the healthiness of the food remains the same. School lunches are often unhealthy. Carbohydrate-laden. Lacking in fresh fruits and vegetables. And chock-full of fats, sugars, and sodium. The never-ending dilemma lasts because school districts and children are constantly at odds. The focus of school districts is on cost, convenience, and efficiency. However, families want food for their children that is tasty and healthy.

Reforming the school lunch system has been a long time coming in the United States as well. Over fifteen years to be exact. For the first time in over fifteen years, the standards of meal requirements in the Unites States will be raised, which will affect the nutrition of the almost 32 million kids who buy from school meal programs every day due to work by First Lady Michelle Obama and Agriculture Secretary Tom Vilsack. “As parents, we try to prepare decent meals, limit how much junk food our kids eat, and ensure they have a reasonably balanced diet,” said First Lady Michelle Obama. “And when we’re putting in all that effort the last thing we want is for our hard work to be undone each day in the school cafeteria. When we send our kids to school, we expect that they won’t be eating the kind of fatty, salty, sugary foods that we try to keep them from eating at home. We want the food they get at school to be the same kind of food we would serve at our own kitchen tables.” At my middle school, the typical school lunch consisted of a tray with pizza, french fries, and chocolate milk for only $2.00. Substitute the pizza for whole wheat pizza, fries with baked sweet potato fries, and chocolate milk for low-fat milk and you’ve got yourself a meal that actually fits the new U.S. standards. It’s as simple as that.

In my opinion, the key to school lunch reform is combining country-wide legislation with local initiatives. 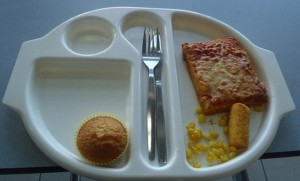 On the macro level, legislation like Michelle Obama’s should be put in place to set standards for school lunches across the country. The old standards are outdated and ineffective at a time when over one-third of American children are considered overweight or obese. However, it can start on the local level too, as in the case with Martha Payne. Technology gives the power to the people. It gives them a forum, which is much bigger than themselves. Take to the blogosphere. Tweet. Post articles on Facebook. Enact social change through the simple act of writing for your local town news online.

Martha Payne’s first post on NeverSeconds was on May 8, 2012. Now, less than a month later, her blog has had over 1.25 million page views and has attracted attention from celebrities, politicians, and healthy school lunch advocates alike. The school has agreed to a healthier menu, including unlimited fruits, vegetables, and bread. The Martha Payne story reinforces an important lesson. Change doesn’t have to come just from politicians. World leaders. Or even adults. A nine-year-old child had the power to enact change in her community. All it took was an idea, a camera, and a blog.