When I started writing my blog last week about the battle surrounding women’s health in Texas I was struck by what a powerful group Don’t Mess with Texas Women had become in just one year. But I was still a little skeptical that they or other groups could impact the system enough to protect their reproductive rights. Luckily, it turns out my skepticism was misplaced. Women have had important 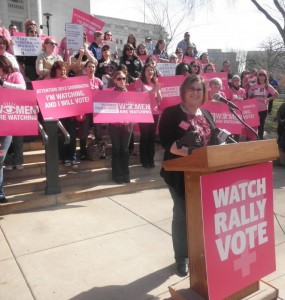 legislative victories in Texas and also Kansas in the last three days. Both victories owe much of their success to the women’s groups who fought against the bills. So for other skeptics out there, like I used to be, keep faith in these groups because they really do have a huge impact on lawmakers and they do make a difference.

Just last week, in Texas, the legislature rejected an expansive anti-abortion law that would have imposed fines and prison terms on doctors for performing certain procedures. If this were last year, that law probably would have passed the same way the law banning funding to Planned Parenthood clinics in Texas did. After the legislature passed that law, women in Texas immediately took a stand against it and began protesting around the state. They wanted to raise awareness about what de-funding Planned Parenthood would do for the health care and challenge the state’s right to infringe on their reproductive rights in that way. They couldn’t affect the passage of that law but they could stop other similar ones from getting passed in the future. I’m not judging whether abortions are right or wrong, but many women in Texas clearly feel strongly that they should have that choice. And that feeling translated into a win in the legislature last Thursday.

Similarly to Texas, Kansas doesn’t have the strongest track record in protecting women’s health rights. But in the past week they also failed to pass a large, sweeping bill that would have made reproductive 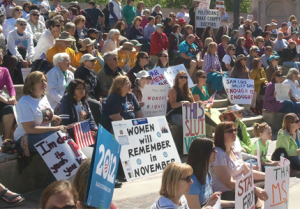 health care more expensive and placed heavy penalties on women seeking to have an abortion. Kansas women didn’t accept this proposal any more than the women in Texas did. They started calling, emailing, and writing state officials protesting the passage of the bill and asking that they not support it. Given Kansas’s legal history, without the voices of these women the bill would almost definitely have gotten passed. But they forced the lawmakers to listen to them and succeeded in keeping the bill from becoming law.

These are just two examples of recent women’s groups’ successes, but women in Virginia and Mississippi have also made their voices heard through similar movements. All these groups were able to spread their message and gather support through social media, event staging, and group meetings. When enough people join together politicians have no choice but to listen to their voices. Especially in an election year like this, they have to pay special attention to the voters if they want to stay in office. In this case, the women knew that and took advantage. They made their demands known and made it clear that they would vote to support their rights. Politicians saw this and acted accordingly. If the women had not been so vocal in their protests, then they wouldn’t have been as important politically and they could have been ignored. They made sure they weren’t. Before reading about these women I was never really sure how much impact protests, letter writing, and other grassroots methods could have on the big picture, but they proved me wrong and I’m happy they did.

These women have inspired me and I hope they have inspired you as well. Their message applies to almost any social movement, not just women’s reproductive rights. They proved that people, regular people like you and me, can bring about change if they’re motivated. If you ever thought about getting involved but chose not to because you didn’t think you could make a difference, look at these women and think again. If you feel strongly about an issue and you’re willing to put in the time and effort, you really can be a changemaker.