I’m sure that you were expecting to read a post about the latest development in Syria today, and, to be honest, that’s what I was planning on writing about.  But as I was reading news article about Assad’s latest peace plan and the continued violence, I realized I really didn’t have much to say that I hadn’t already said.  I’ve written several posts about Assad making peace agreements and then breaking them, and they’ve all ended in almost the exact same way.  Why write it again just because his latest peace deal has been all over the news?

So instead this post is about Libya; specifically a southern tribe that threatened to break away from Libya and form a separate state on Wednesday.  Violence erupted between the African Tabu tribe and nearby Arab tribes in southern Libya three days ago, and over 50 people have died since then.  Tabu leaders stated that they would declare their own 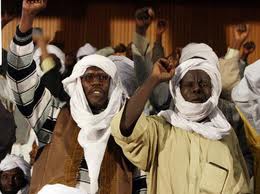 state to protect their people—one said that the Tabu were being subjected to genocide—after the central government in Tripoli failed to intervene and stop the violence.  A leader of one of the Arab tribes, the Zwiya, however, said that his tribe would fight anyone who calls for dividing Libya.

This is not the first time that partition has been suggested since Gaddafi’s fall.  A tribe in eastern Libya announced they were considering forming an autonomous state, Barqa, which would take up almost half the country.  And the Tabu tribe got into similar ethnic conflict with the Zwiya tribe just last month, which resulted in several deaths and injuries.  The fledgling national government has tried to keep a handle on the situation but has been largely ineffective, leading critics to suggest that Libya may break up into at least two parts.

So why the sudden outpouring of ethnic conflict and separatist sentiments?  Gaddafi suppressed tribal conflicts and turmoil, and since his fall these old hatreds have risen up to the surface once more.  It reminds me of the situation in Yugoslavia after Tito’s death, when all the ethnic tensions he had managed to suppress broke out in incredibly violent conflict between the Serbs, Croats, Bosniaks, Kosovars, etc.  We all know how that ended: years of war, hundreds of thousands dead, UN and NATO intervention, and the dissolution of Yugoslavia into several states, many of which are still dealing with tensions.

Of course the situation is a bit different in Libya.  For one, in Yugoslavia the various leaders vying for power in Tito’s void exacerbated tensions by reinforcing ethnic differences, which helped ignite the violence.  So far there don’t seem to be any demagogue-type leaders in Libya attempting to exploit old wounds, though the transition

government doesn’t exactly have control over the ethnic conflicts, either.  Tabu leaders have even suggested that the central government has sided with the Arab tribes and in response have requested UN intervention.

Now let me be clear here.  I am not suggesting that Libya will be the next Yugoslavia, but only pointing out that there are some similarities.  Gaddafi was in no way like Tito, but both were fairly effective at suppressing ethnic conflict, which then broke out after they left power.  And no matter what happens in Libya, whether it remains one country or breaks up into two or more, it isn’t going to be easy, nor was it easy in Yugoslavia. What do you think would be the best option?  Remaining one country or splitting up?