Last week I was watching Jon Stewart where he interviewed Arne Duncan, the Secretary of Education, when they discussed the education system in America and the new Obama plan of Race to the Top. You can watch the 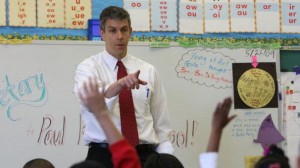 interview here, but essentially it is Stewart criticizing this new system, which has been a lackluster attempt to overcome the Bush era’s No Child Left Behind policy.

A week back, one of our writers Areeba discussed Race to the Top (R2T) in a post about states that are opting to not participate in the new initiative. Essentially R2T is a system of awarding points to high performing schools in an attempt to spur competition among states for rewarded funding. In changing education policies, promoting the elevation of nationwide standards, and increasing the number of charter schools; R2P has had to face growing criticism from politicians and educators alike.  One point that I appreciate Stewart brining up in the interview was how this new initiative, which was implemented in 2009, is similar to No Chile Left Behind because it continues to teach to benchmarks and performance tests. This was where the majority of the criticisms for the previous policy stemmed from: the emphasis on teaching to pass a test instead of teaching with a more holistic approach to education.

One of the most informative parts of the interview, however, was when Duncan called for schools to act more as community centers and to provide “wraparound services”. This means that schools should be more available to the community, and allow the public to access libraries, computers, and classrooms when the classes are not in session. This asks that at night and on weekends offer the space to be used as health clinics, adult education facilities, and recreational areas.

Being in the development field, this seems counterintuitive. Organizations today who work towards building schools in developing nations would not dream of building a school with such limited functionality. Today, most organizations work towards fostering the neighborhoods with the schools they construct, taking into account community needs and other purposes the schools can serve. It is amazing to think that all the while this practice has not also been being used within our own communities here in the US.

While opening schools to the community and R2T do not seem to coincide with one another directly, I argue that they are more interrelated than one would imagine. The connecting piece to this puzzle is the movement towards the two-generation strategy. This strategy essentially recognizes the fact that we need to educate parents as well as kids in the hope of future success. There is a correlation between low performing schools and districts where parental involvement and education are also low. By opening the school doors to parents and community members for afterschool technical training and education opportunities, I believe that we will also see an increase in academic success among students.

One organization that is promoting the concept of a two-generation strategy is Ascend. They are recognizing and bringing attention to the connection between educational achievement and economic security. In working to foster educational success together, parent and child, Ascend hopes to break down the hurdles of economic stagnation that arise from low levels of education. While not directly functioning with R2T, this policy will help to strengthen the support that children will receive at home with regards to their education.

No doubt education is a multifaceted issue, where many opinions come into clash and debates over best practices become vocal. I do not yet know if R2T is the best policy towards improving education standards or if it will be just another failed economic reform. However, I do believe what Duncan said in the Stuart interview is true: “I think we have become too complacent…. We have flat lined… We have to be willing to challenge the status quo”. The idea of opening the schools to the communities seems to be an obvious first step. Another is to attempt to offer opportunities for parents to increase their levels of education in step with their children. Perhaps these two factors towards education should take a higher priority in education reform as opposed to focusing on testing numbers and results. I believe that this is where the changes and improvements will become the most visible in our education system.