By now, it is accepted as a scientific fact that climate change is happening. The average global temperatures are rising and it is related to the human activities and the increase of emissions of carbon dioxide over the last centuries. But the discussion as to what we should do about climate change is more complex and has more controversies.

Recently, in one of my classes, my teacher asked what we thought the impacts of climate change were going to be. I realized that many students related climate change to sudden and catastrophic events.  Typhoons, hurricanes, tsunamis, tornados… I am 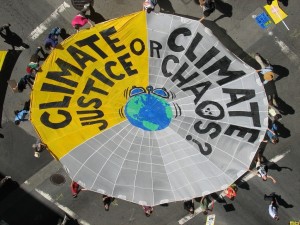 surprised to see that when some people hear “climate change” the first thing they think of is a potential future catastrophe that takes place in a specific point in time. Should we really be waiting for a catastrophe?

Although there is no certainty about how climate change is going to impact our lives and our economies, catastrophic events as depicted in Hollywood films or in Al Gore’s documentary are not going to be the most damaging manifestations of climate change. New York City is not going to sink, and Europe is not going to freeze in a day. Climate change is not an event that takes place in a specific day and time; it is a whole process and it is happening continuously. We have to be skeptical of the sensationalist stories.

To tackle the problem of climate change, we first must understand it. The most important impacts of climate change will take place gradually. Agricultural land that is fertile now, won’t be so fertile in the future. Its productivity will gradually change and shift, causing rural migrations to increase. Species extinction will continue to rise and damage the lifestyles of many communities. Glaciers will continue to melt and as more permafrost defreezes, the increase of the average global temperature will not be stopped.

While we decide on how to deal with it, it is already impacting people and nature. Massive wildlife biodiversity, changes in the agricultural patterns, increase of extreme weather. All those events are impacting people who are not even responsible for the changes in weather patterns (poor people with small carbon footprints for example). They are going to be the most impacted by climate change, not New Yorkers.

New York can easily build a wall around Manhattan to protect the Financial District. But who is going to care about the poor island countries such as Tuvalu who are in threat of sinking too? Who will care for the rural communities where agricultural production will decrease or for the wildlife whose habitat is being destroyed? The social injustices derived from climate change are going to be the ones that need the most attention and the ones social activists and environmentalist have to focus on. Climate change is a matter of social justice and that is why we should all care about it.