Education is one of the most important commodities in the world, and many of us are privileged enough to have access to education in the United States.  However, this is not the case for millions of undocumented immigrants who currently live in the U.S, but are unable to access higher education.  Millions came to America in order to further their studies, and have an opportunity to chase after the American dream.  Unfortunately, many academically gifted immigrant students have been barred from top universities in states like Georgia.  For that reason, four professors from esteemed universities in Georgia have banded together in order to provide academically gifted students a chance to learn in a university environment, with the hopes that one day the students will be admitted to top Georgia universities.

Freedom University, the name of the unofficial academic institution, boasts a remarkable faculty of four professors who teach undocumented students once a week 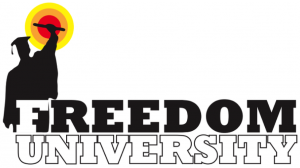 Unfortunately, the issue that many undocumented students at Freedom University are faced with is the fact that they identify themselves as Americans.  Students like Karl Kings and Leeidy Solis were brought to the United States by their parents when they were one or two years old, and have no recollection of their native countries.  They want to attend elite Georgian universities because they feel that their academic achievements should be enough to qualify them into a top competing institution.  Regrettably, their undocumented status hinders them from attending the school of their dreams or pursuing the career that they have always envisioned.  Though Freedom University provides these academically gifted students an opportunity to learn in an aggressive college environment with qualified professors, they receive no credit for having attended the classes.  Thus, the students spend their time studying and excelling at Freedom University, but there is no way for them to show that they have attended college-level classes.