You’ve probably heard about it. Then again, maybe not. Despite the fact that the U.S. Women’s National Soccer Team has won three straight Olympic gold medals, and was runner-up in the 2011 World Cup, women’s soccer is still struggling to receive the attention and respect it deserves in both the mainstream U.S. sports media and international soccer organizations alike.

Case in point? For the first time in soccer history (men’s or women’s), a World Cup final will be played on artificial turf. FIFA has made the decision to allow Canada to host all 2015 World Cup games – including the final in B.C. Place Stadium in Vancouver – on artificial surfaces rather than natural grass, which is preferred by both professional players and coaches alike.

Peter Montopoli, CEO of the World Cup organizing committee and general secretary of the Canadian Soccer Association, defends the decision, stating that the use of artificial surfaces (which have much lower maintenance costs than natural grass) was clearly outlined in Canada’s original bid for the 2015 Women’s World Cup, and that international soccer officials were fine with the decision to switch to turf. What he failed to mention – Canada submitted the only bid to host the tournament.

Upon hearing the news earlier this year, many international players were up in arms, offended by FIFA’s decision. They felt pushed aside, slighted by a committee which should be advocating for their interests rather than hindering the growth of their sport. A petition directed at Makudi Worawi, the Chairman of FIFA’s Women’s World Cup Committee states:

We, the undersigned, demand that FIFA change the venues for the women’s 2015 World Cup games to fields with natural grass.

Why is this important? This year, the Women’s Gold Medal soccer match for the London Olympics was the NBC Sports Network’s most watched event in history of the network with 4.35 million viewers. More people around the world livestreamed the women’s final than any other sporting event during the Olympics.

And yet, still, women’s professional soccer players struggle to be given the respect they deserve. The latest afront to professional women’s soccer players comes with the decision by FIFA to hold the 2015 Women’s World Cup Final game on artificial turf.

Abby Wambach has been the most vocal of the American players thus far, stating her disapproval of FIFA’s decision on many occasions. Just last month, she was quoted as saying, “We as the highest-level international players have a responsibility to see that we don’t take steps backwards, and I think this would be giant leaps 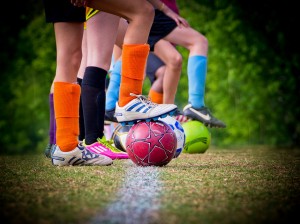 There are numerous reasons why the upcoming Women’s World Cup shouldn’t be played on an artificial surface. Turf changes the way the game is played – balls bounce higher and roll faster when they are on turf rather than natural grass. The wear and tear of playing on turf (which is a less forgiving surface than natural grass) leaves players with numerous long-term injuries, such as joint aches and general fatigue. Since artificial turf creates more friction than grass, players are at a greater risk for knee injuries and ankle sprains. Concussions and turf burns (think of your most painful rugburn and then multiply that pain by ten) are also common on artificial surfaces.

However, it’s not just about the turf. The change in the style of play, the fear of injury – while important, are simply afterthoughts in a greater discussion on the role of women in sport. It comes down to the the principle of the matter. The Men’s World Cup would not be played on an artificial surface. Coaches wouldn’t stand for it. And players certainly wouldn’t stand for it.

Female soccer players had to petition their way into their first Olympics 17 years ago. Now they have to petition for the right to play on a surface in which they feel is the most safe and comfortable. When will women’s soccer stop being treated like a second-rate sport? When will FIFA finally begin to work with women to progress the sport, rather than always holding them back?