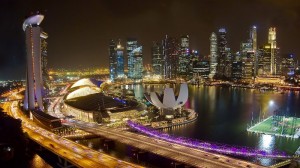 the internet. The standard of living is also one of the best out there. Economically and technologically, it seems like Singapore is one of the places to be; maybe even a fantasy land.

However, this perception of this “perfect” society might change. A new regulation just came into effect a couple of months ago that might affect the corruption perception index and the future of Singapore. The government has imposed new regulations on Singaporean news where one needs to obtain a license if the company or an individual reports on Singaporean news at least once a week. Not only do they have to pay for a license, the government is allowed to regulate the content as well. This impedes with one of the essential rights for human beings; freedom of speech and expression. However, the control of media by the government is nothing new in this country. In fact, control by the public sector in most aspects of the country is not new. I believe that with this new enforced regulation on media, the corruption index will worsen. Let me first explain what the corruption index is.

When I first started looking at this issue in Singapore, I was confused. The country has one of the highest corruption index, but one of the lowest press freedom index. However, after considerable amount of thinking, the one thing that made me make sense of the issue was the word perception. I had concentrated so much on the 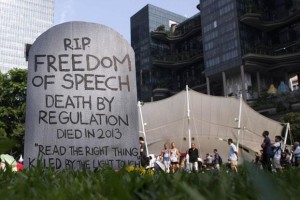 word corruption that I forgot the importance of the word, perception. The corruption perception index, like I had mentioned, is based off of the people. From this my understanding is that, although the Singaporean public sectors control most aspects of the country, the people are satisfied with it. The tight controlled policies by the  government provides safety to the people, which is one of the most important components to happiness for citizens in Singapore.

However, the media control is getting tighter and the people are noticing it. People have been rallying and protesting towards the government meaning, they are discontent. I think this will be an interesting turn for Singapore. As more and more dissatisfaction appears within its citizens, I think the course of the government will change in the next election in 2016. Although this is a huge assumption to make, I think that an opposition group will arise due to unsatisfied citizens from tight media regulations. Singapore is a country where most people are connected to the internet, which I believe is one of the most significant reasons why the current government cannot continue to regulate media. The government should act before anything serious occurs that may crumble its economic superiorance. I want to make it clear that I am not suggesting that the large amount of control by the public sector is a bad thing, what I am saying is that controlling the freedom of expression and speech is not advisable. People should have the right to express their thoughts and what the government is doing is exactly the opposite.

What do you think will happen to Singapore and the future of the current government?