As I started working on this post, I did my usual scroll through twitter and a few of my favorite sites searching for a topic about women to write about.  And as I’m sure you’re aware, there’s A LOT of information regarding women’s issues available these days. But as I was searching, something really struck me. Why was the story so one-dimensional in the mainstream media? There were articles everywhere highlighting successes in women’s movements. But where was the rest of the story? I knew there were still areas we needed to improve on, but those stories were much more difficult to find. So that got me thinking: why is that the case? What are the potential 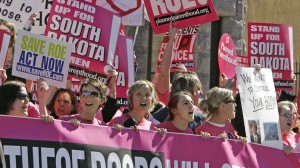 consequences of this shortcoming? And how can we fix it?
To listen to the conversation happening in the media, women are making giant leaps forward in the fight to gain rights. Yes, certain, politically salient issues will occasionally come up, but for the most part women are portrayed as having more or less achieved equality. And with elections coming up this November, the story has become even more skewed. Both political parties are trying exceptionally hard to appeal to women. So of course, President Obama and Mr. Romneyespecially, have been highlighting their achievements and downplaying any shortfalls. But if you look at the facts, there’s a lot more to the story than we’re really seeing. For each step we take forward, there’s almost as many steps backward to go with it. And yet these areas receive significantly less media coverage.

Take for instance a law recently upheld by the Supreme Court in South Dakota. Doctors are now required by law to inform women seeking an abortion of a link between abortion and suicide. Except that there is no concrete scientific evidence demonstrating that the connection actually exists. So doctors are now essentially obligated to 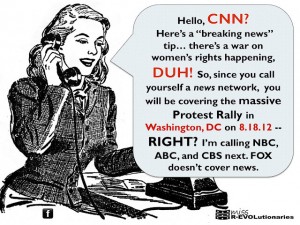 lie to their patients. This clearly infringes on women’s rights in my opinion. But have you heard anything about this law? Not likely.

Or what about the new law the Utah state legislature passed, which increases the potential punishment for feticide? A good idea in the abstract, but what’s exceptional about this law is the new possibility for a woman to be prosecuted if she miscarries. According to the statute, any “risky” behavior that threatens the life of the fetus could result in imprisonment for the mother. Of course a pregnant woman needs to be careful and take care of herself, but is it really right for a woman to face criminal charges for potential accidents? Again, this seems to be another example of the state limiting women’s rights and decisions.

But somehow neither of these cases, or others like them, have received much media attention. Which given the issues at stake and the outrageous nature of the laws, I find shocking. So why does mainstream media insist on highlighting progress but ignoring setbacks? Is that really in our best interest? I honestly don’t think so. In fact, I think this misrepresentation of the current situation in women’s rights has greater potential issues than simply inaccurate news coverage. If we focus only on the positive, we run the risk of becoming complacent. I know not everyone will, but many people could. It’s an easy trap to fall into and one we need to avoid at all costs if we’re going to continue working to improve our lives.

Don’t get me wrong. There really is some great work happening right now in the women’s rights arena. Both in the government and through other organizations. So the stories we see aren’t wrong per se. But everything isn’t as rosy as I think we sometimes like to pretend. It’s important that we be aware of EVERYTHING that’s happening, not just the things that make us feel good. If we want to really change women’s lives, to really sustain the progress we’ve made, then we can’t afford to misinterpret the situation. And that means encouraging media to cover all issues equally.

Writing this post was my first step in demanding the media provide fair and equal coverage of women’s rights. But you can take action too. You can imitate the women who made the picture attached to this post. You can contact the media using different, more traditional methods. Comment back to let me know of other methods you can think of to make the media listen. Let’s get this conversation started and really ensure women get their voices heard.