You’ve probably noticed that women’s health has been in the news almost constantly over the past few months. The coverage has mainly focused on reproductive and contraceptive rights, which are both extremely important. But I think we sometimes forget there’s more to women’s health than just those issues, including breast cancer, depression, body image, and osteoporosis to name just a few. Unfortunately, these aspects can sometimes get lost in the shuffle as the more “interesting” rights debates continue. Or worse, they’ll sometimes get sucked into those debates, with negative consequences. Women can sometimes actually start 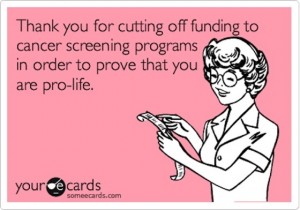 losing health care coverage when issues start overlapping in this way. But women’s health is too important for it to be used in political discussion.
I know we’re not going to all agree on every area within the realm of women’s health. But I think we should be able to separate the controversial topics from the more widely accepted ones. Unfortunately that’s not what’s been happening. Take breast cancer screenings for example: one of the most important preventative measures for breast cancer. You’d think there would be no way someone would revoke funding for that. But you’d be wrong. Earlier this year, the Susan G. Komen Breast Cancer Foundation decided to pull funding for breast cancer screenings from Planned Parenthood. Of course, the reasoning for the decision stemmed from the most controversial topic of all: abortion. Komen didn’t want to continue providing funds to an organization that supported a woman’s right to choose. Even though the money went only towards cancer screenings. How could the Komen Foundation sacrifice women’s health safety just to take a stand against abortion? It seems absurd, but that’s what they did. Even though the abortion debate had no direct effect on the stated purpose of the organization or the use of the funds that went to Planned Parenthood. They still chose to make a political statement at the expense of women’s personal health and cancer prevention.

Both luckily and unluckily women chose to fight back any way they could. As a result, Komen’s fundraising ability plummeted this year because people were protesting their decision. Eventually the Foundation reversed their stand and returned funding to cancer screenings given by Planned Parenthood. Women were successful in their protests and righted a wrong (at least in my opinion.) But it came at a cost. Think about all that money that Komen didn’t raise this year because of the protest. What could they have done with that money? How many women could they have helped? Don’t get me wrong, in no way am I saying that women were wrong to protest Komen’s decision. In fact, I applaud their decision to stand up for their rights and beliefs. But I think it’s incredibly unfortunate that the abortion debate managed to negatively impact cancer research and thereby women’s health in such a destructive way.
Women’s health covers an incredibly broad range of topics. Which include areas that have sparked huge controversies throughout our nation. But that doesn’t mean we should be arguing over ALL areas of women’s health coverage. Or turning the ENTIRE topic of women’s health into a political debate. People can argue about reproductive rights all they want (and I know they will). But that shouldn’t affect other areas in women’s health that have no relation to the debate. Women should have affordable access to cancer screenings. They should be able to receive counseling for mental health issues. And they should never have to worry about losing that ability because of disagreements surrounding other issues.

Does abortion have a direct connection to cancer screenings? No. Do cancer screenings have any relation to the use of contraceptives? Of course not. So why have these things ended up in the same debates? I don’t really know the answer to my question but I think it’s something we need to consider. And more importantly it’s something we need to stop allowing. At the end of the day, women have the right to good, effective health care. That’s simply non negotiable.