I was watching my sister write thank-you cards the other day, when she came across a card from an older couple that she didn’t know very well. She stopped, realizing that she didn’t know how to properly address the envelope. I checked online and discovered that traditional etiquette dictates that a formal invitation or card should always be written “Mr. and Mrs.”, followed by the male’s full name (example: Mr. and Mrs. John Smith). Instantly, I became aggravated. What’s wrong with just a simple “John and Jane Smith”? Why should it always be the woman’s name, which has to be excluded?

The thinking behind using traditional etiquette is to first and foremost, promote respect. It’s about making other people feel comfortable and at ease at all times. However, there comes a point when traditional etiquette becomes just that- traditional. And therefore outdated. Personally, I feel rather uncomfortable at the prospect of only being referred to in relation to my husband’s identity when I’m older. Why should my name be the one to become ignored and forgotten? Why should I give up one of my greatest sources of pride, my female identity? 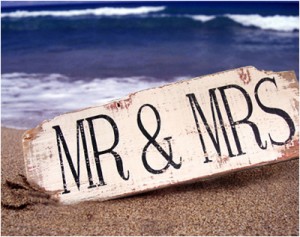 Gendered language has long had a home in the English language. For centuries, it has served as a way to perpetuate certain gendered roles and expectations. Think back to elementary school, when you tried to memorize the difference between “Mrs.”, “Miss”, and “Ms.”. Traditionally, “Mrs.” was used for married women, and “Miss” was for those who were unmarried. However, years ago, “Ms.” was introduced as a female equivalent for “Mr.”. Women were finally able to be greeted in the same manner as men, where their name was their first and only identifier, and marital status was only an afterthought. However, the use of “Ms.” is still limited, and has a far way to go before it catches on in daily conversational discourse, and especially until it makes its way into the books of “traditional etiquette”.

Where else does gendered language turn up in the English dictionary? There’s a long list of gender specific terms, which are scattered throughout the English language. Words like “man” and “mankind” are often used to refer to women, yet connote images of only males. “You guys” is also used often in conversational discourse. The problem with using such gender specific terminology is that it sets men as the golden standard. With such words, women take on a sort of half existence, in which they are ignored the right to a fully autonomous identity. Their identity becomes marked solely by their relation to men. The good news? That many of these gender specific words often have gender neutral counterparts:

To use a gender specific noun, is to say that an individual’s sex is relevant to an identified role. It’s to say that only men can become chairmen, policeman, fireman, or even mailmen. When children are taught such terminology, it plants the belief in their mind that only men can dream of becoming such occupations.

In 1972… some three hundred college students were asked to select from magazines and newspapers a variety of pictures that would appropriately illustrate the different chapters of a sociology textbook being prepared for publication. Half the students were assigned chapter headings like “Social Man”, “Industrial Man”, and “Political Man”. The other half was given different but corresponding headings like “Society”, “Industrial Life”, and “Political Behavior”. Analysis of the pictures selected revealed that in the minds of students of both sexes use of the word man evoked, to a statistically significant degree, images of males only — filtering out recognition of women’s participation in these major areas of life — whereas the corresponding headings without man evoked images of both males and females…. The authors concluded, “This is rather convincing evidence that when you use the word man generically, people do tend to think male, and tend not to think female”  – Douglas R. Hofstadter

Why is there such resistance to changing to a more gender neutral language? Studies have found that those who react negatively towards such changes are in fact those who hold more sexist beliefs in the first place. Of course they don’t want to change the language. They’re often the ones benefiting from it. It is important to examine the nuances of the English language because at the end of the day, language does shape our social reality. Words have the innate ability to reinforce our beliefs about both ourselves and the world in which we live. By allowing “man” to become the anchor of our language, “woman” is only allowed to hold the place of the “other”. As long as such gender specific language exists, true gender equality cannot be achieved. However, the beauty is that while language can be a reinforcer, it can also be an instrument of change. If people allow themselves the opportunity to use more gender neutral terminology, the opportunity for change is alway there. And just like that, we finally might be able to create for ourselves a new standard of reality, and a renewed chance for gender equality.