We often tend to make over-generalizations and over-simplifications in addressing global issues.  My research area of water privatization has lead to many interesting questions, more so, than concrete answers.  Partly, I think that these questions can lead to narrowing down policy decisions for more suitable results.  What I’ve seen is that these over-generalizations can lead to inefficient policies across the board.  The different case studies I’ve researched have led to many uncertain conclusions.  They have shown that water privatization is not an absolute answer to our water problem.  The connection between privatization and efficiency has a lot to do with contracts enforcement.  Many countries in Latin America have not seen improvements in their water system structure after its privatization.  Instead, this has led to a cycle of unaddressed issues and lack of solutions. 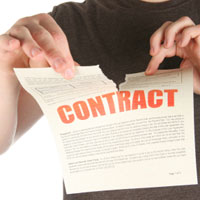 We could point our finger at most of these corrupt governments for the inability to address basic sanitation issues.  After all, governments form the path of their countries through policy making.  However, the concept of governments is too large to tackle in order to find solutions for the problems at hand today.  For some countries, privatization has been a right move because of improvements in water availability and management.  However, the problem is that this policy cannot be implemented in all countries.  Specifically, water privatization cannot survive where there is no contract enforcement.  Suez, the largest water company in the world, has recognized this concept in preferring to invest in more developed countries.  The political atmosphere of developing countries brings uncertainty and yields inefficient results.  Even if companies risk the political instability of these countries, this also results in the violation of contracts.  This is where privatization can directly affect people.  Because governments implement a business market in their water sector, liability is left to the water company, for example Aguas Argentinas  in Argentina.

What is on paper, however, doesn’t translate to what is seen in the small towns like in Berazategui, Argentina.  In the region of Rio de la Plata (Silver River), privatization has shown to be as inefficient as in other countries in Latin America, I’ve mentioned before.  Pressured by the World Bank and the International Monetary Fund (IMF), the Argentine government privatized this water region in 1993.  Besides the 88.2% increase between May 1993 and January 2002 (not including the 7.3% inflation rate), there was no improvement in water sanitation.  Instead, contaminated water unfit for human consumption persists, where only 12% of the total water resources received full sewage treatment.

This inefficiency, of course, was protested by the local people.  As a result, the Argentine courts demanded that Aguas Argentinas fulfill its contract and construct a water purification plant in Berazategui within 18 months.  In 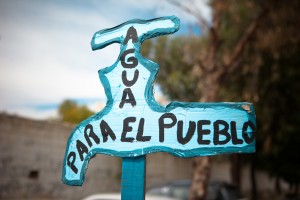 response, company spokespeople first responded by stating that “technically, this is not a responsibility of the company, but of the government”.  After this argument was refuted, the company said “we are complying with the judge’s wishes, but environmental improvements require more than a treatment plant: they require a much wider plan”.

The ongoing question for examples like this one is whether the company will fully comply with the contract agreements.  This may not be achieved when the blame is passed around between company and government responsibility.  When we look at governments, their inefficiencies can be seen throughout different sectors.  Privatization is often welcomed in efforts to manage water more directly (and theoretically more efficiently).  But this is not translated when contracts are left in the dust after the privatization goes through.  As I research more in depth this idea of privatizing water, I dig further into some of the main root causes for its inefficiency.  What I want to highlight is that there is an inherit lack of contractual enforcement in many developing countries.  This plays a huge role in tearing down the misconception that water privatization is good for all countries.  The more we look at the world in a globalized matter, the more careful we need to be in generalizing “solutions” for all.  As you can see, different economic-political environments yield different results.  I think that we need to get more informed not only on global issues but also on local issues that have their own unique environment.  We all can be activists for different areas of policy and rights.  Yet, getting to really know a specific issue of a local area seems to be more difficult and has proven to even hurt the residents of that area at times.