Higher education is perhaps one of the most controversial and hot button topics that come up on an almost perennial basis.  The current debate revolving around universities and colleges hones in on high tuition rates and budget cuts.  While students feel frustrated by annual tuition hikes, universities feel the heat of stringent budget cuts.  It appears as though a compromise between students and university officials is not on the horizon, especially for Santa Monica College in California.  The community college has decided to offer a two-tiered tuition system that will allow certain classes at higher prices.  Students who are antsy to get into popular classes will get in without a hitch if they pay more.

The proposed two-tier system has caused a severe backlash within the student body of Santa Monica College.  Thousands of students have flocked to protest the changes the community college has settled upon.  Core classes, such as math and English, are some of the most sought after courses, so the college has decided to offer two rates.  The standard fee for a class is $36, but students who are willing to pay more may secure a spot at $200 per course.  College officials hope that student enrollment will increase with the two-tier system ever since California community college enrollment numbers declined in 2009.  Many believe that a shortage of openings in key courses are at fault for a lack of enrollees, and believe the tuition system may be able to attract more students.

However, the glaring reason why students are protesting the tuition changes at Santa Monica College is the fact that community colleges are supposed to be affordable.  Many students attend community colleges because they do not have the financial means or grades to attend a four year university, but still wish to pursue a higher 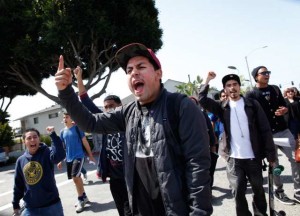 education.  The two-tiered tuition system jeopardizes the stabilizing effect community colleges have in society as well as in the lives of students.  Young people who are unable to attend a four year institution feel a sense of security and happiness because community colleges are an affordable means of continuing their education for a future career.  In this economy, statistics show that some kind of higher education is needed because by 2018 a college education is going to be needed to attain most jobs.

On the other hand, state budget cuts have proven to be a difficult pill to swallow for most community colleges and universities across the United States.  Combined with the fact that student enrollment has declined, Santa Monica College must be feeling the heat to raise money.  Though I have no remedy to solve budget cuts, there is a key point Santa Monica College has failed to take into consideration.  What will happen to students who are unable to pay $200 per course if some of their peers begin to shell out the money to secure a spot?  There is already a shortage of seats in many core classes, and it will lock out hundreds of students from their classes because they cannot pay for a reserve seat.

Santa Monica College needs to rethink the two-tiered tuition system because the negatives appear to outweigh the positives.  It is difficult for me to believe that the college thinks it will attract more students by introducing a two-tier system.  If anything, more students will feel disadvantaged and disheartened by a system that allows those with more money to buy a classroom seat.  Community colleges are supposed to encourage students to continue their education at an affordable price if they are unable to attend a four year institution.  It seems counter-productive to allow students with more financial leeway to secure a class seat while leaving others feeling helpless.