So last week I sort-of sporadically decided that I’m going to Dharamsala, India in June (you can call it a graduation gift to myself).  To let everyone, know Dharamsala is in northern India by the Himalayas and south of Tibet.  Besides the community service I’ll be doing there, one of the most important reasons I wanted to go to this region is to learn more about Tibetan culture and the people that live there.  Perhaps you may not have seen much news on Tibet or their monks and nuns that are setting themselves on fire, but it’s a reality that many 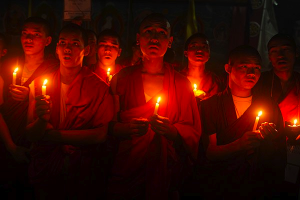 people are not aware of.  Actually some people don’t even know that Tibet exists on this planet; but perhaps that’s the main question that has brought so much unrest within this region.

People’s Republic of China, which is north of Tibet, took possession of Tibet in 1951 and abolished the Tibetan government in 1959, after their leader, the 14th Dalai Lama, journeyed to exile in Dharamsala.  Since then, the 14th Dalai Lama has made Dharamsala his home establishing a rival government-in-exile, theCentral Tibetan Administration (CTA), with the goals of “rehabilitating Tibetan Refugees and restoring freedom and happiness in Tibet”.

But, what exactly is happiness in Tibet?  If we change the clock from 1959 to present day Tibet, we can see that unrest remains amongst the people of Tibet.  Like I mentioned, there are numerous cases of monks and nuns setting themselves on fire.  We can acknowledge these self-immolation acts as the ultimate sacrifice for the freedom of Tibet.  In particular, Robert Barnett who is the Director of the Modern Tibet Studies Program at Columbia University says that this is a new form of protest by these Buddhist Tibetans in a way that sends a clear message without involving multiple people.  Tibetan culture is one of the most peace-seeking cultures there are, with emphasis on peaceful demonstrations.  Though these self-immolation acts are not exactly peaceful ones to see, it definitely sends a message and harms no one but the person sacrificing their life.

I can say that I have never seen any news on TV about these protests; I think this can be best attributed by the fact that China doesn’t want anyone involved in their “internal affairs” as Chinese foreign ministry spokeswoman, Jiang Yu, said in addressing this issue.  So according to this, it is none of our business.  But the question is: are human rights violations outside of our country really none of our business?  I want to bring this up because recently here in New York, there have been protests against the Chinese government’s hold on Tibet.  Last week 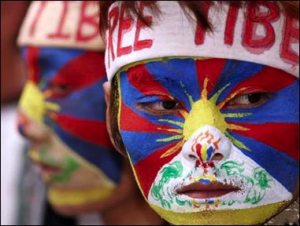 was the start of the Tibetan New Year called Losar, but instead of having festive celebrations as usual, Tibetans decided to make it a period of mourning for all those people who self-immolated themselves in the name of freedom.

Outside of the United Nations, Shingza Rinpoche, Dorjee Gyalp and Yeshi Tenzing went on a hunger strike in efforts to convince the United Nations to address human rights violations in Tibet and to show solidarity with other Tibetans that are also protesting for their freedom.  Like these three men, Tibetans all over the world seek freedom for their country.  People may know about Tibet and about its efforts to seek freedom, but do people really know about these problems beyond the superficial headlines?  I think people believe they know about what’s going on, but rather stay out of it because it’s “none of their business”.  Well I think that next time you pass by a Tibetan protest, you should speak to someone there and really get a unique perspective.  Next time you’re at a bookstore, look at some of the books the 14th Dalai Lama has written and make your own assessments of what’s really going on.  How can people have voices if there is no one to truly hear them? How can Tibet gain its freedom if they’re the only ones that believe in it?  Do you think Tibet has a right to be free?