What would society look like if we all employed a bit more empathy? This is the precise question that Ashoka and their team of fellows have embarked on answering. The definition of empathy as outlined by Webster is: “the action of understanding, being aware of, being sensitive to, and vicariously experiencing the feelings, thoughts, and experience of another of either the past or present without having the feelings, thoughts, and experience fully communicated in an objectively explicit manner.” To quote Bernard Amadei, the founder of Engineers without Borders, “Empathy is not what we see today: empathy is not 1.2 billion people who lack clean water; it’s not 29,000 people who die each day unnecessarily; empathy is not the pollution of the Yellowstone river; it’s not 1.6 billion people who lack electricity.”

Taking a step back, Ashoka is an organization that unites social entrepreneurs from around the world to develop 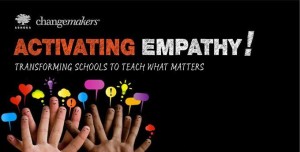 social sector projects, promoting collaboration and support in addressing global needs. Some of the brightest minds in social innovation and entrepreneurship have become Ashoka fellows and their contributions in the last 20 years to the field of development have been immense.

With this leverage they hold, Ashoka has taken upon this new initiative of promoting and teaching empathy within the educational systems; with the goal of teaching children the importance that such awareness has on future problem solving. From their site, they argue for empathy by stating: “Empathy plays a crucial role in innovation, change making, and solving entrenched systemic problems. We need the skill of applied empathy – the ability to understand what other people are feeling and to guide one’s actions in response – to succeed in teams, to solve problems, to lead effectively, to drive change.”

Empathy is a broad concept, and I don’t think most of us think about how it affects the decisions we make regularly. I think empathy, when it is lacking, is much more apparent to western societies than when individuals are employing it.

One really great YouTube video about empathy is posted below. It is 10 minutes long, and the beginning can be a bit technical, but excellently outlines why “to empathize is to civilize”.

The takeaway from this video, and the message that Ashoka is promoting is that “we need to rethink the institutions of society, and prepare the groundwork for empathic civilizations”.

Empathy is a driving force in development work, and arguably the predominant reason that individuals go into work with social enterprises. For this reason Ashoka believes that empathy should be approached as a subject with the same levels of importance as math or sciences. Empathy is not a characteristic we are born with, but instead is learned as we mature. Therefore, this issue can cut along all societies and cultures. Similarly, I believe that this is why it is one of the most uniting features as humans and why I agree that it must be promoted globally.

Imagine what can be accomplished if we begin training our children to think on a more global scale. I agree with Ashoka that this will be a fundamental breakthrough as we continue to move forward in improving the plight of the poor. Giving a greater perspective to our children will inevitably move global innovation further as these students create better communities, societies, and institutions.

Amadei believes that since we are educating our future decision leaders, we must institute this understanding and awareness now. He argues for hands on educational experiences stating “sometimes you have to drink the same drinks and use the same bathrooms before you feel compelled to do something. Then you break free of the idea that you’re superior to anyone.”

Besides Engineers Without Borders, Ashoka is working with organizations around the globe to promote this new ideology. Organizations such as Search for Common Ground, who are working to promote collaborative problem solving within conflict zones, is just one example of empathy development programs. Here is a clear case for how empathy can come into play and alleviate potential conflict escalation. If two sides of a violent conflict can be mediated toward understanding one another, there is a chance that less blood will be spilled in the road towards solving the issues at hand.

Typically I am weary of statements or policies that impose a particular way of thinking or value system upon a different culture. However I don’t think that promoting empathetic thinking is something that will inherently harm any society that is exposed to this methodology.  I think that Ashoka has nailed down a particularly important aspect of development theory often overlooked by larger organizations, and for that I applaud this new initiative.