February 16th, 2011—Demonstrators, emulating those in Tunisia and Egypt (which Libya is located between), take to the streets of Benghazi to protest Muammar Gaddafi’s 41 year regime.  The arrest of Libyan human rights activist Fethi Tarbel is 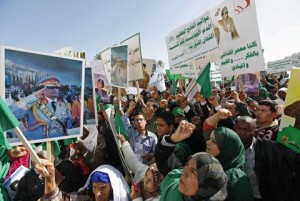 believed to have sparked the protest.  An estimated 38 people were injured in the clashes between protesters and police forces.  The event was dubbed the “day of rage.”

March 13th, 2011—The EU releases a statement saying that Gaddafi’s regime has lost all legitimacy and that he must step down.  However, no decision is made as to whether or not there will be an international intervention or a no-fly zone.

March 18th, 2011—After a prolonged debate, the UN announces that it will enforce a no fly zone over Libya.  President Obama pledges his support.  In the following few days NATO and several other countries also pledge their support.

May 1st, 2011—NATO airstrike kills Gaddafi’s son, Saif al-Arab.  Several other friends and relatives are also injured or killed in the attack.  Anti-Gaddafi activists suggest that Gaddafi killed off his son to get sympathy.

June 27th, 2011—The International Criminal Court issues a warrant for Gaddafi’s arrest, calling him and several others to stand trial for crimes against humanity because of the violent crackdown against the protesters.

October 20th, 2011—After 8 months of fighting, Gaddafi is killed under mysterious circumstances.  The country erupts in celebration.

November 22nd, 2011—Libya’s interim Prime Minister, Abdel Rahim al-Kib, announces the line-up of the country’s interim Cabinet.  The Cabinet will have to work hard to gain legitimacy so that it can tackle the many issues facing Libya.

December 12th, 2011—Two people are killed in a clash between the rebel militia and the interim government’s fledgling army, proving that the transitional government is having difficulty asserting its authority over the country.

What’s Ahead—the transitional government already has its work cut out for it, as it must draft a new constitution, restore order, and lead Libya to democratic elections in just a few months, and clearly has not been accepted as legitimate by the people, which makes its job all the more difficult.  Gaddafi’s death and the end of his 42 year dictatorship was cause for celebration in Libya, but it remains to be seen whether or not the interim government can do its job and set up elections, or if the country will descend once more into violence.

February 4th, 2011—activists use Facebook and Twitter to organize a “Day of Rage” in Damascus as a protest against President Bashar al-Assad, but few show up. 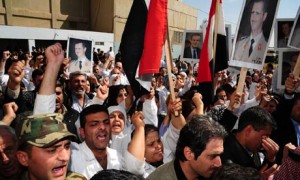 about 200 protesters show up.  Protests quickly spread across the country.

March 29th, 2011—The Syrian cabinet resigns in the face of continuing unrest and violence.

April 8th, 2011—The UN Security Council condemns Syria’s deadly crackdown and demands that al-Assad carry out political reforms. It is estimated that over 1,600 people have been killed since the protests began in mid-March.

April 29th, 2011—President Obama signs off on sanctions against the Syrian government for what has become possibly the most violent crackdown against protesters.

May 18th, 2011—Obama issues more sanctions against Syria, despite the ineffectiveness of the previous sanctions.

May 29th, 2011—A 13-year-old boy who was tortured and killed after spending a month in Syrian custody becomes a symbol for the protesters.  Observers wonder if this boy will achieve the same status in Syria as Mohammed Bouazizi in Tunisia.

June 20th, 2011—President al-Assad offers vague promises of reform while retaining his position as President.  Protesters, angered by his reaction, take to the streets once more, calling al-Assad a liar.

August 7th, 2011—As the violence continues the Arab League finally joins the international condemnation of the Syrian government.

December 7th, 2011—al-Assad tries to distance himself from the bloodshed in his country by saying that he never ordered the suppression of demonstrators, despite the dozens of tanks and hundreds of soldiers that have killed thousands in the last nine months.

What’s Ahead—Syria has been stagnant since the protests began in earnest in March, which is probably what has made the country less of a media darling than its neighbors.  Despite the horrific violence the nation has suffered, neither the opposition nor the government seem to be on the verge of winning.  The international community, wary after the massive cost of getting involved in Libya, seems hesitant to offer anything more than strongly-worded rebukes of the Syrian government.  Hopefully the country reaches some sort of breakthrough soon, lest the violence continue.