To begin with, today Tuesday the 29th, the Fourth High-Level Forum on Aid Effectiveness opens in Busan, South Korea. The goal of this Forum is to focus on developing efficient ways of giving international aid while working to build stronger 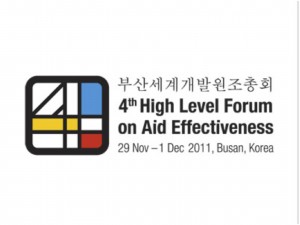 partnerships between donor and recipient governments.  This is the first time the forum is being held in Asia, where the three previous ones took place in Rome in 2003, Paris in 2005 and Ghana in 2008.

Now, recognizing that there has been three such meeting in the past, I would have expected to hear more of a buildup to this fourth Forum in Korea. After all, I follow developments in international news almost daily. However, since it has hardly registered on my radar, I can’t help but wonder why the international community has not taken greater notice. Or to phrase it differently, why they feel hopeless in reporting on it.

A Google search returns many articles that use words like “a weak un-ambitious agreement”, and “fall short on priority issues” regarding improving aid effectiveness and increasing transparency in international arenas. These articles all reference past Forums and what they have failed to address.

Moving forward, this year in Busan the 2,500 policy makers and experts attending the conference aim to move away from this shaky past and begin analyzing what actually has worked with aid in the last five years. Now, typically an event like this would make me excited and optimistic about spreading the news and information about the developments being made in international aid. Typically, this should highlight what has been done and motivate future policy makers and leaders to carry on the torch of eradicating poverty and promoting transparency. However, I am fearful to say that I don’t feel all that optimistic that these positive outcomes will be recognized. Instead, I fear that it will draw attention to how little actually has been accomplished on behalf of the developed world in assistance towards developing countries.

One of the most moving calls to action comes from The Guardian writer Ivan Lewis, stating:

The rules of engagement that will govern aid effectiveness in the future may to some seem technical and dry. But in reality the stakes couldn’t be higher. It’s about … thousands of children who die unnecessary deaths from conditions such as diarrhea and pneumonia, and the kind of world we want to pass on to our children and grandchildren. We owe it to them to do better and recognize that in an interdependent world self-interest and mutual interests are inextricably linked.

I fear that while these are the goals desired from this Forum, we will see only limited results and lip service to the international community. After all, this appears to be the trend from previous attempts.

One thing that I would like to see addressed in this round of discussions, is integration and a call to action of the BRIC countries, asking them to take a greater role in promoting development. BRIC is an acronym for countries such as China, India, Russia, and Brazil that are emerging markets. They are classified as developing at a more rapid rate in comparison to the rest of the world. They should join in the commitment as new donors to play their part in supplying international aid support and funding. In the past, these countries as well as the Arab world have allegedly been hesitant to play any major role in aid due to the predominant leadership of other stronger (typically Western) economies. However, this must change if we wish to eradicate poverty on a global scale. Problems like aid effectiveness are global issues, and will only be solved with combined efforts of all nations.

Over the next few days, it will be interesting to watch what resolutions come from Busan. While I would like to see a revolutionary new plan of attack and a significant increase in number of countries jump to action, I don’t have the highest hopes. Instead, I hope that small steps with regard to the BRIC countries are pushed forward, and the media attention to past failures are pushed under the rug. This Forum has an opportunity to shake up the current international establishment and demand for better work and effectiveness. Now, lets just hope they manage to achieve it.