This last week, I had the honor to attend the Festival of Thinkers conference in Abu Dhabi. In what turned out to be essentially a whirlwind trip, I was chosen to represent 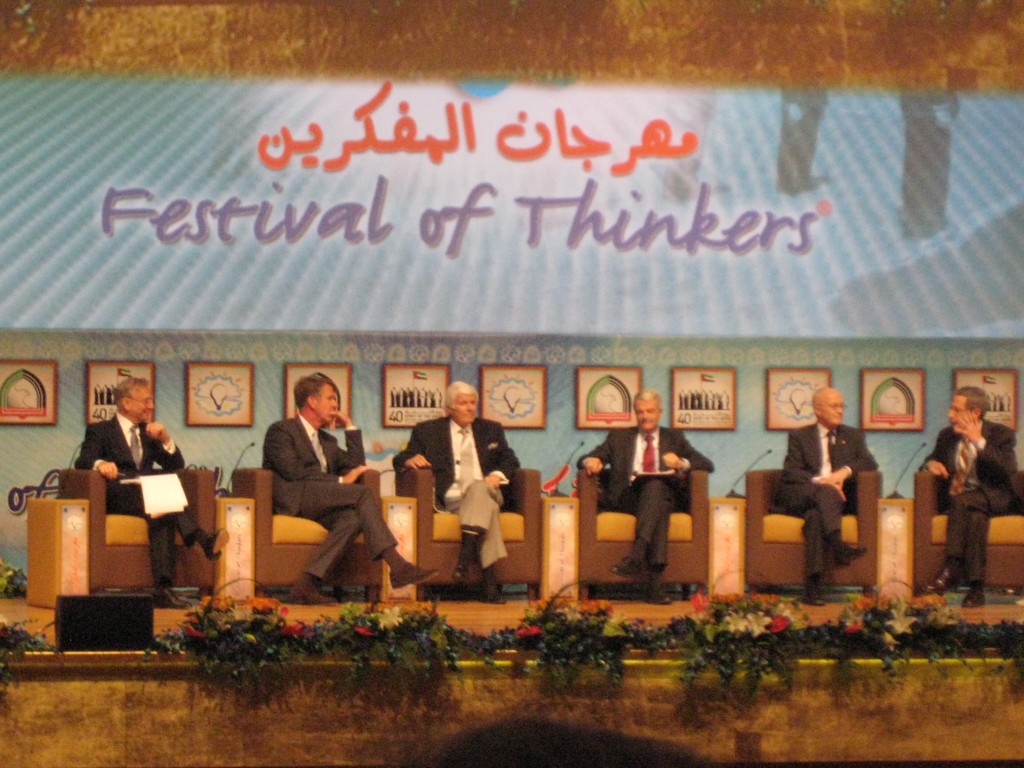 NYU over a weekend, and by the following Wednesday I was on an airplane to Dubai in the United Arab Emirates (UAE). Now for someone who was not quite sure where the UAE even was, (on the Arabian Peninsula, by Saudi Arabia and Oman) I was ecstatic to jump at the opportunity for a new adventure. Upon returning to the US, and fighting the inevitable jetlag, looking back to my week I am realizing it has been an extraordinary experience.

The goal of this festival was to bring together students from all over the world to discuss and think about the growing problems facing our future. What added to this was the integration of nearly 100 Nobel Laureates and field experts bringing their expertise on diverse topics to the discussions. Unlike the many conferences I have attended in the past, we were broken down into small tables of a few students alongside these notable individuals to analyze problems ranging from the global economic crisis to creating a sustainable world for the future. While understandably we are not going to be asked to solve these issues in an hour among four individuals, the process of thinking and brainstorming with one another was the valuable takeaway.

One interesting skill we were encouraged to adapt was from Edward De Bono’s theory of the Six Thinking Hats. This was an approach to problem solving by looking at the issue from six different points of view. Examples include white hat representing facts, the yellow showing positive aspects of a proposed solution, the green hat representing the development of new solutions, and blue is taking into account the whole process. While this philosophy is hard to think about in the abstract, when approaching a difficult problem we were all asked to put on different hats and propose solutions. I found these workshops stimulating in that this practice leveled the playing field between Laureates and students. Similarly, this brought forth interesting solutions and took a number of groups in divergent directions when solving such large-scale issues.

I feel like I could go on and on with a list of noteworthy names that I was privileged to have met last week, but I will leave it at saying that this conference had many perks outside of the lecture hall. As students, one of the nights we were honored to have met 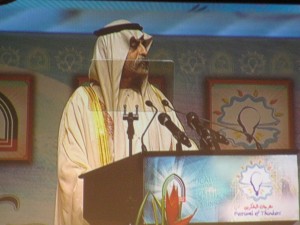 Sheikh Nahayan Mabarak Al Nahayan, the Minister of Higher Education in the UAE as well as hundreds of likeminded students from around the world. We were treated to a gala at the Palace, as well as housed throughout Abu Dhabi; all with the goal of constant interaction and fostering networks amongst our peers. One of my colleagues Tochi Onyebuchi said it best when he reflected:

This reminds me of a quote by Miriam Beard. She said, “Certainly, travel is more than the seeing of sights; it is a change that goes on, deep and permanent, in the ideas of living.” And if it may take a while for some of the wisdom I’ve received to sink in, it is only because those seeds have just been planted. And it takes only patience for me to see, whether in three days or in three months or in three years, the sublime and gorgeous garden that will have been made of such seeds.

I think it is safe to say that all of us students left the conference with a renewed sense of purpose and understanding of why we are studying our chosen paths. I realized that when one speaks of the financial crisis, for example, we acknowledge that it has had a global impact. However, it is not until I was eating breakfast with students from Azerbaijan, Pakistan, and Brazil that a human’s perspective of the impact can be truly understood. This recognition brought light to why we chose to become academics and personally why I chose to study politics and development.

To bring such disperse students together is to plant the seeds of motivation to change the world, and I think that the future is in our hands.  Although it often does not feel like it in the middle of all night library hours and stacks of research, I now recognize that there are other students on my same path and with similar goals. Also, there are scholars who have paved our way and want to push us to challenge their successes for the future.

I must admit that I have come back with a renewed sense of purpose in working towards my degree.  I feel as though I was taken into the folds of people much smarter than I and asked my opinions and thoughts on some very important issues.

While we were far from identifying a magic bullet to solve any of the global problems we discussed, such an opportunity was priceless. I can only hope that many more students in similar positions get the opportunity to find a reawakening within the academic field, and renew the challenge within themselves to work towards a better future for our world.