Rigoberta and Wangari share many things in common, and there is no wonder why they won the Nobel Peace Prize. Their fight to protect human rights meant the threat of their own lives, but fear never stopped them. They were both smart and clever in finding ways in which to bring international attention to their struggle and therefore facilitate their resolution. In order to protect what they believed in,  both women faced discrimination, violence, and human rights abuses. It is probably those experiences that really empowered them to keep fighting and gave them even more determination.

Rigoberta’s life trajectory and her achievements are quite exemplary. She was born in 1959 in Guatemala and grew up in a poor Quiché Indian family. Her activism started 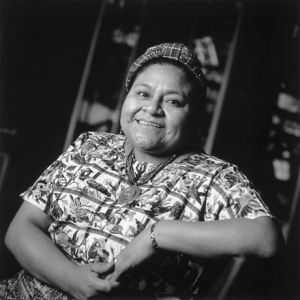 during the Guatemalan civil war. Rigoberta received little education but at an early age was involved in social movements, fighting for political reform and social justice. She became one of the leaders and a symbol of her country’s struggle for peace and stability.

Rigoberta became a political and human rights activist at the peak of the Guatemala civil war. She became involved in her father’s movement, the United Peasant Committee. She was wanted by the Guatemalan government, but after her mother’s death, she fled to Mexico. While in Mexico, she dictated her autobiography, I…Rigoberta Menchu (1984), telling the world not only her own story, but also about the lives of her fellow Indians. In 1988 she returned to Guatemala and was detained. She  was eventually liberated because of international support.

In 1992, Rigoberta Menchú was awarded the Nobel Peace Prize. She used the $1.2 million cash prize to set up a foundation in her father’s name to continue the fight for human rights for indigenous people even after the end of the civil war. The organization now runs with her name. The goals of the organization represent the personal struggles of Menchú. She had no access to a good education, she grew up in an environment were her rights were not respected and surrounded by government oppression. That is why The Foundation serves many diverse causes ranging from those that seek justice for the victims of genocide committed in Guatemala to coming to the defense of victims who have suffered discrimination and racism. It also provides support for education.

The foundation’s code of ethics is:

There is no peace without justice,

There is no justice without equality,

There is no equality without development,

There is no development without democracy,

There is no democracy without respect for the identity and dignity of all cultures and people.

Those lines summarize the life struggle of Rigoberta Menchú. Her fight for peace is a fight to protect cultural diversity and mutual respect through democracy and development. The code of ethics represents what Rigoberta experienced in her life. Growing up in a country in war, her main concern was to find peace and social stability, only achievable through democracy and the protection of people’s rights.

Rigoberta’s vision of democracy is really interesting. She knew that peace and stability would only be possible through real democracy, that is, through the respect of identity and dignity of all peoples. For her, there is only peace were there is democracy. However, to obtain democracy it is necessary to have justice, equality and development. That is what her foundation struggles for; they fight for the means in which to achieve democracy and respect of human rights, not human rights in itself. I think that this approach gives her organization a stronger voice, and it allows them to have an important short and long-term impact. For example, one of her main projects is education. Education is a requisite for human rights because it is the only way in which people are empowered. Another initiative of the organization is promote Guatemalan laws that promote equality of opportunities and non-discrimination (laws that give voice to different ethnic groups, to different working groups or unions). Through those intiatives, the organization is engaging in short term and long-term change.

Her example is exemplary for the fight against human rights violation. By promoting issues such as development, education and justice, she approaches human rights problems in a holistic manner, therefore making it more sustainable. It is her holistic approach to the human rights issues that have given her the international recognition and popularity.