In 2010, not only did I go back to school, but for the first time took online classes. Because of my hectic work schedule, I couldn’t commute to school, so instead I decided to take courses in the comfort of my own home. I did fear; however, that I would miss out on networking and mingling with my professors and classmates. I decided that I would make up for that by attending on-campus events when the opportunity arose. A few months into my life as a PhD student I saw my first chance. The university’s speaker’s series was hosting a one-night only event featuring Archbishop Desmond Tutu. Having never heard him speak before, I was blown away by his charisma and the power of his message. In his wonderful speech, he focused on humanity, its atrocities and our responsibility as human beings, and he did it in a realistic yet lighthearted, humorous and heartwarming way.

In previous posts, I have discussed human rights issues affecting the most vulnerable in our society. In this post, I wanted to showcase a group who is working to combat some of our world’s most unsolvable conflicts. This group is called The Elders and it is chaired by Archbishop Tutu.

The Elders is an non-governmental organization (NGO) that was convened by former South African president, Nelson Mandela. At its launch in 2007, he stated that the goal 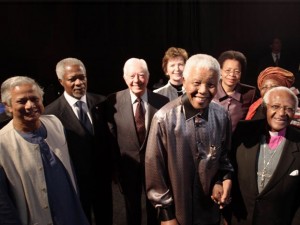 of the group was to tackle some of the most prevalent problems we experience today: hunger, environmental disasters and climate change, AIDS, and poverty. Because of the high profile members, they hope to use their experience, knowledge and connections to make a change.

Apart from Archbishop Desmond Tutu, the Elders consists of 11 other world-renown leaders. In alphabetical order, these include:

Since the group’s inception, they’ve focused on projects that aid to alleviate human suffering and violent conflict. For example, The Elders visited Cyprus to discuss the tensions between the Greek and Turkish residents on the island. They’ve also attend meetings and functions in the Korean peninsula to help improve the relationship between the two countries (North and South Korea).

Several of the Elders traveled to the Middle East to examine the impact of the long-standing conflict between the Israelis and Palestinians and to promote peace in the region. Their agenda also included a visit to the African continent, including the nation of Sudan, where they addressed the two-decade long civil war. The group does not only focus on highly volatile areas but on subject areas like gender equality, discrimination especially if it’s due to religion or tradition, and child marriage.

It is amazing to see a group of people of such caliber put aside egos and gender and cultural differences for the greater good. Their experience, intelligence and know-how are unrivalled. The realist in me worries that this might become another bureaucratic nightmare or only a symbolic entity with no real purpose or power.

The idealist part, who wishes to save the world, can’t imagine how the synergy between the members cannot generate solutions to many of the problems that plague the world. There is definitely no other group like it. For more information on The Elders, support their work and learn how to help, please visit this link.