As you may recall, I wrote a post over the summer about Responsibility to Protect and the Arab Spring.  In this post I discussed the intervention in Libya and how the creation of a “no-fly zone” was a manifestation of this RtoP.   I also discussed the reasons why RtoP was not going to be invoked in any of the other Arab Spring nations, and some of the debate surrounding the issue.  Well, in a startling move this Monday, Joe Lieberman became the first US senator to publicly declare his support for a no-fly zone in Syria.

The opposition within Syria has wanted the imposition of a no-fly zone for some time now, but the international community has been slow to react. Every week protesters in Syria take to the streets, hoisting banners and loudly requesting the no-fly zone that 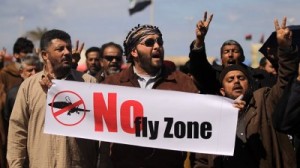 they hope will stem the violence that has become part of their everyday lives.  People in the areas that have experienced the most violence especially support a no-fly zone.  And last week a coalition of leading Syrian opposition groups made a formal request for international intervention, a request that included the creation of a no-fly zone as well as the creation of a safe zone for military defectors, an arms embargo on Damascus, and a peacekeeping mission to protect civilians.

The response from the international community was tepid.  The United States and many European governments have little desire to repeat the intense campaign in Libya, and several permanent and temporary UN Security Council members have stated that they will not support any further sanctions against Syria.  Critics argue that the majority of people do not want a no-fly zone, pointing out that the Syrian National Council, the body appointed to try to lead the opposition groups,  did not join the formal request for intervention.  US officials look at the fragmented opposition groups and insist that the opposition groups do not want any kind of foreign military intervention, just monitors to help prevent civilian casualties.  Some activists outside Syria argue that the international community just isn’t there yet, and while the activists inside Syria are fed up with the way things are, the international community will not be the deus ex machina they are looking for.

Arab governments, meanwhile, were a bit more positive.  They noted the rising casualties in Syria and agreed that intervention was becoming increasingly necessary.  Just the threat of a no-fly zone could help to tamper some of the violence and encourage more soldiers to defect. Unfortunately, without the UN, there is little that they can do.

Now that Joe Lieberman has stepped forward, however, I wonder if the conversation will change and the possibility of an international intervention will become reality.  Lieberman and others (including Ambassador Ford and Senator Robert Casey) spoke up out of frustration with the stagnation and inactivity on Capitol Hill when it came to Syria, and if more senators and government officials speak up it is possible that the Obama administration could start to push for an intervention in Syria.  This could in turn sway the UN, or at least some European governments, to impose a no-fly zone over Syria.  Whether or not this is a good idea is a question for another day, as there are lots of tricky issues to unravel when it comes to an international intervention.  Still, with the continued violence in Syria and the increasingly desperate cries of the protesters, it’s clear that something has to be done.