Another Type of Refugee

As I was writing the blog series analyzing the current situation at Dadaab Refugee Camp, I started to think about the need for refugee camps and services in general. A refugee is a person who flees – or who has been displaced – from their home and seeks refuge elsewhere. Many refugees flee in fear of persecution, oppression, conflict, and violence. However, in today’s world there is an increasingly motivating factor that causes people to leave their homes and seek refuge: climate change and natural disasters.

It’s no secret that severe weather events have become much more extreme thanks to climate change. From floods in Pakistan, to droughts in the Horn of Africa, to hurricanes in New Orleans, natural disasters are a threat to the entire globe. In just one 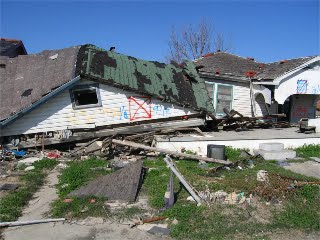 instant, homes and communities can be destroyed, and people are forced to relocate their families and completely start over. This is why it’s becoming increasingly important to establish an international policy to support and protect these so-called “environmental refugees.”

According to an article released by the Internal Displacement Monitoring Center, more than 42 million people were displaced by a natural disaster in 2010 alone. Of the 42+ million, more than 90% of refugees relocated because of a climate-related disaster. Obviously, these are not small numbers.

António Guterres, the United Nations High Commissioner for Refugees, recognizes the importance of creating a global framework and international plan for protecting environmental refugees who are forced to leave their homes and cross national borders. Currently, these refugees are not protected because they’re don’t fit the refugee definition under the terms of the 1951 Refugee Convention, which protects the fleeing victims of persecution and violence. In fact, the United Nations Refugee Agency refused to even acknowledge the “environmental refugee” terminology because they were afraid it would cause too much confusion between those fleeing from violence and conflict and those fleeing from natural disasters. Because of this, Guterres proposed the creation of an new, global framework that established interim protection for environmental refugees and strengthened global capabilities to accommodate those who are forced to flee from their homes due to climate change and natural disasters. I can’t imagine that people who are forced to leave their homes and cross national borders be penalized for doing so. It’s important that they instead feel supported and welcome.

Of course, this isn’t as easy as it sounds. After the earthquake in Haiti, for example, more than one million people were displaced. How can a neighboring country account for this many people at once? And to complicate matters further, Haiti lies on an island (Hispaniola) that’s made up of just one other country: the Dominican Republic. Not only would it be extremely difficult for the DR to suddenly accommodate 1+ million people, but there are also existing political tensions between Haiti and the DR. There are no easy answers. Perhaps a portion of the refugees can receive assistance with transportation off of Hispaniola and onto a mainland. Obviously, it would take quite some time to transport, so maybe the DR could receive financial incentive to help temporarily accommodate Haitians who are waiting. Again, there are no easy answers, but there are possibilities to make the international community more supportive when these tragic events occur.

But as climate change continues to cause natural disasters to become more extreme and more common, there needs to be an additional focus on sustainable methods of refugee support that are independent of emergency aid – the international community needs to establish a model empowering refugees as they relocate while enabling them to rebuild their lives. I definitely think an international model of protection for refugees is important, but I don’t think it’s the only global initiative that needs to be established to support refugees fleeing from a natural disaster. If their entire community was destroyed, it’s extremely unlikely that refugees will have the funds and abilities to simply create their new lives in a foreign place. Perhaps there should be temporary environmental refugee-specific camps (as opposed to including environmental refugees in camps filled with refugees fleeing from violence and oppression) that offer specific services that help them recover and rebuild their lives. The refugee camps can’t just offer emergency aid and supplies – they must have those extra services. The more common these severe weather events become, the more useful – and necessary – these refugee camps will be.