A few weeks ago, I wrote about how the Horn of Africa is currently experiencing one of the most severe droughts in history. For countries like Somalia, Kenya, Ethiopia, and Djibouti, the drought is forcing families to flee to overcrowded refugee camps and leaving hundreds of thousands of children homeless and malnourished. Unfortunately, conditions in East Africa have grown considerably worse, and as of this week, a state of famine has been declared in several parts of Somalia.

It’s important to recognize the difference between a drought and a famine in order to understand just how much more severe this situation has become in the past few weeks. A drought is simply a reduction in rainfall that consequently impacts agricultural production, crop yields, and food supply. A famine occurs when there is a 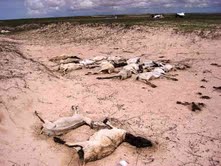 great reduction in the availability of food,  which can be caused by a drought. According to the United Nations, a famine means that more than 20% of households are facing extreme food shortages, malnutrition rates are above 30%, and more than 2 people per 10,000 are dying everyday. With a drought comes the threat of famine – and this was certainly the case in the Horn of Africa a few weeks ago – but ideally the affected areas are equipped with enough aid to get them through the tough time without a state of famine being declared. Unfortunately, for parts of Somalia, this did not happen.

There were many factors contributing to the lacking aid in Somalia, but one of the major causes was political tension. Much of southern and central Somalia, along with the capital city of Mogadishu, is controlled by al Shabaab Islamist militants who are affiliated with al Qaeda. Because they thought food aid created a certain dependency on Western nations, a ban on the aid was administered. According to the United Nations, this food ban made it extremely difficult for food agencies to work in various regions of Somalia. In fact, the U.N. World Food Program claims that Somalia is one of the most dangerous countries to work in, due to regular kidnappings and attacks on aid convoys. Without food aid being imported into Somalia, its citizens were left with few other options. Drought conditions, limited food supply, and rising food prices were simply a recipe for disaster. Somalia obviously needed external help and international aid in order to survive the drought, but wasn’t able to receive it and prevent famine.

Finally – because conditions in Somalia had become so terrible – the rebels lifted the food ban this month. The United Nations, along with many other organizations, plan to launch huge relief efforts immediately to bring relief to Somalis. This will be no easy task – almost $1 billion dollars in famine relief is needed, according to Oxfam International. Severe conditions aren’t limited to Somalia, either – much of Ethiopia and Kenya face them as well. Refugee camps are especially overcrowded and under-stocked, so East Africans who have fled to them are struggling with limited food and medical supplies. Hopefully, with the recent food aid ban lifted, more food aid can be delivered and distributed in Somalia and other parts of the Horn of Africa.