Developed nations and individuals feel the need to carry on with the “white man’s burden” (to quote Kipling’s poem). For Kipling, the white man’s burden is the responsibility to help and civilize others who seem less technologically and culturally developed. Indeed, since colonial times rich countries and individuals (generally white) have offered assistance, either with good or bad intentions behind it.

Nevertheless what we now see as poverty may not be as dramatic as we hear. It’s not to say that poverty doesn’t exist. It does, and it is serious. But it has become more of a problem of inequality than of scarcity, a problem of justice more than of resources. To give just one example, nowadays more people die of obesity than of hunger (heart disease are the primary cause of death worldwide, see here). It is estimated that 1 billion suffer chronic hunger but over 2 billion suffer from obesity.

So it seems that overproduction is actually killing us! And bad distribution of food kills some others. Maybe the white man’s burden is now a burden to help him-self and not “the others”. Kipling’s poem should be updated (with a less racist tone).

Unequal consumption is not only a matter of food. We could also compare how we use energy, or compare how we use resources (natural and financial), to see that the solution relies on distribution and not exactly production. Knowing how much we can produce, we may even start asking ourselves what is the meaning of being “developed”. Is it just being more wealthy and productive? When we offer development, what exactly should we offer? I think that before taking any action we should try to answer those questions.

A while ago I volunteered for a non-profit to build a house for a poor family in Mexico City (Un techo para mi pais). Their home was small and they had very few things. Our 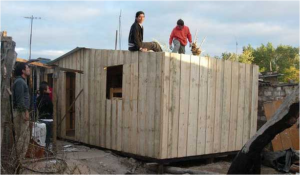 task was to build them a new house, and when we finished it we were all (the volunteers), feeling pretty good about ourselves. After all, we’ve just built a house!

But the family I was with was not as enthusiastic. They were grateful, for sure, but we really didn’t do anything to lift them out of their poverty, and they knew it. The poverty that we saw in their house was “tragic” to us because they didn’t have good clothes, tennis shoes or good shampoos. But they did have a roof, food, and clothes. We had felt that by building a new house we were making them less poor, but the truth was that the family felt poor only when they compared themselves to us. Poverty becomes a matter of inequality, not scarcity.

On the other hand, what was really tragic was that the mother could not raise her children because she had to work 10 hours as a maid and was not paid enough to save money. What was tragic was that the father had to commute 2 hours to get to his work. Everyday he had to walk, bike, and hop on the subway before getting there. If he was late or could not go, he did not have any rights to protest, and was at risk of being fired and losing his job.

Sometimes we think of people as poor because they don’t have everything we have, and therefore we try to help them. But development is a matter of human rights and of leveling the playing field more than it is of giving better standards of living. What the family needed was better institutions, better services, and more opportunities. I almost feel we could have been more useful in the long term by giving them a civics class and teaching them their rights.

Whenever we’re faced with poverty (or I should say inequality), we feel compelled to help, often out of some type of “pity” or “guilt” that individuals don’t have the same things we have. But this only leads to band-aid solutions. Because of the separation between “us” and “them”, “we” try to help according to what “we” think “they” need. This separation hides (and even denies) the connection we all have with each other, and it helps us (the developed) deny that we are also part of the problem, not just the solution. Sometimes we just want to get rid of the poverty we see on the surface, so that we don’t feel bad. We don’t dare to blame ourselves, and recognize that we are responsible for it as consumers and producers. (Thomas Pogge further develops the idea in his book). Until we do this, we’ll not be able to find long-term solutions. The “white man’s” most important burden is to re-examine itself and its role in society.

Julia Naime is a Research Intern at the Sisgi Group. She’s soon to be a senior at New York University, majoring in Economics. During her internship, she will research about sustainable development, international economics, and environment. She deeply believes in the interconnectedness of our world, and the need to find sustainable solutions. To learn more about the SISGI group, visit sisgigroup.org