When the “Arab Spring” began in mid-December, 2010, most of the news coverage was quite hopeful.  North Africa would soon become democratic, which would be beneficial for the US, and life would rapidly improve for citizens who had been oppressed by dictators like Gaddafi and Mubarak.  But it didn’t quite happen like that.  Gaddafi still hasn’t stepped down, nor has Ali Abdullah Saleh, and the violence continues daily in many cities throughout the Arab world.

Areas where the violence has ended aren’t exactly peaceful, either.  Take, for example, Misurata, the third largest city in Libya that was for three months the scene of horrific street battles between Gaddafi’s forces and the protesters (including the infamous Battle of Misurata).  The fighting has since moved outside the city, and residents have begun to rebuild despite the lack of government and infrastructure.  Leading the recovery efforts are a small group of residents who joined together to form a committee that would tackle the most pressing issues.  They started with daily needs 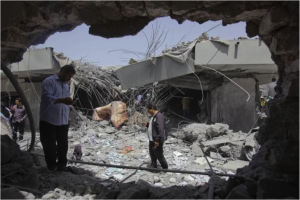 like water and electricity, setting up numerous specialized committees and subcommittees devoted to finding a way to recover.  They set up warehouses to distribute food, established a committee that will assess the damage done to Misurata’s buildings and come up with a plan to rebuild, and converted a steel factory into a generating plant that provides power for the city—though not as much power as is needed.  In fact, there isn’t enough of anything.  The food supplies stored in the warehouses are dwindling, the electricity flickers on and off, and the city’s fuel supply is low.

Even with the help of foreign aid the city does not have all that it requires to rebuild.  Doctors from around the world have flown to Misurata to help the overwhelmed local medical staff, but even with the extra manpower the temporary hospitals are overwhelmed and items like bandages and painkillers are in short supply.  An anonymous donor provided 40 satellite dishes and 100 satellite phones to Misurata families, but there is no cellphone network and Internet connections are rare.  Food supplies are dwindling, especially fresh food like vegetables and dairy products, and the warehouses will soon run out of food unless international aid is provided.  In short, though the violence was officially declared over in Misurata, the city is far from the bastion of democracy and stability that many in the United States (as well as other Western countries) had hoped it would be by now—and it’s just one city.  Libya as a whole is still in a state of perilous uncertainty, plagued by violence and a hotbed of unrest and anger.  Misurata is a large port city, and so is comparatively better off than much of the interior of the country, and yet residents are struggling to get food and water, let alone medical care and electricity.

It should be clear by now that the Arab Spring is not going to end as well and as quickly as many had predicted.  Early news coverage of the events in Egypt and Tunisia was hopeful and celebratory—democracy has arrived!  Everything will work out!—but most of the people in these countries live in fear not only of violence, but of starvation.  This isn’t a call for international aid (though that is very important) but simply a call for pragmatism.  These revolutions aren’t going to be easy.   No revolution is ever easy, especially when it comes to rebuilding and restructuring.  It’s time we faced that reality, instead of burying our heads in the sand and declaring it a win for democracy; rebuilding is going to take a long time and will require a lot of effort not only from residents but from the international community.  These areas have little to no infrastructure and many of the basic necessities like food and medicine (and water, an issue my colleague Ryan discussed in a post about rebuilding Iraq last week) are in short supply, and so even with the most dedicated leaders it’s going to be a long time before these countries achieve any level of stability and security.