Who would have thought that the self-immolation of a fruit vendor in Tunisia could effect so much change within the Middle East? As the citizens of Arab states revolt, the status quo and operating procedures of many countries have been drawn into question. In the somewhat geographic center of it all, Israelis have been wondering exactly how this will affect their nation. The decision announced yesterday by the Egyptian government to permanently reopen the Rafah crossing, the main entry point from 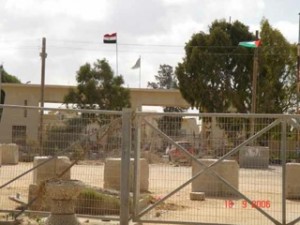 Egypt into Gaza, shed light into the future of the Egyptian-Israeli relations, who until now have shared an alliance that defines Israel’s relation to the Arab world.

The Gaza Strip is home to some 1.5 million Palestinians. Since 2007, Israel, with the begrudging support of Egypt, has blockaded Gaza. Restrictions on what could enter and exit the Strip, which had been in place since 2001, were tightened severely in 2007, leading to the deterioration of the quality of life for many Palestinians living in the region. The BBC estimates that today, Gazans rely “on less than a quarter of the volume of imported supplies they received in December 2005.” It’s not hard to imagine what this drastic cut in supplies meant for the daily life of Gazans: less food, less medicine, reduced access to electricity, reduced supplies of clean water and so on.

The UN Relief and Works Agency (UNRWA) for Palestinian Refugees estimates that 80% of Gazan households rely on some type of food aid. Much of this reliance on food aid could be alleviated if Israel were to reduce the restrictions on what is being allowed into the Strip. While the restriction of materials that could be used to produce weapons is understandable, it’s wrong to block basic foodstuffs from entering the region, something Israel has repeatedly been criticized for doing.  Does anyone believe that punishing 1.5 million people for the terrible actions of select terrorist organizations will really move the general Palestinian population towards a peace arrangement?

With the announcement to open the border crossing, Egypt has shown that it’s not willing to wait and see if the Israeli blockade strategy will work in time. This is the first action taken by the new Egyptian government that has truly displayed their position on the tenuous Israeli-Egyptian alliance, though the unity deal between Fatah and Hamas was arguably the precursor. With the permanent opening of the Rafah crossing, scheduled to begin this Saturday, Egypt has decided to go against Israel and allow supplies to flow openly through the crossing. A bold move, indeed.

As it stands, the alliance remains in tact. But how long will Israel continue friendly relations with a nation that is supporting a policy that Israel outright rejects? Regardless of the shaky alliance, Israel should recognize and effectively address the plight of the Palestinians living in the dirt-poor conditions of the Gaza Strip. Forcing a population to succumb to near complete reliance on aid coming from outside sources is not an effective method to building a sustainable future. On the contrary, it stokes the fires of bitterness and hatred that have been burning for years, a fire neither side seems able, or perhaps willing, to extinguish.

Now that Egypt has taken a stand, defied Israel and opened the border, the future is largely in the hands of the Palestinians. Gazans should use this event to develop trade routes with the outside world, boosting their economic status. UNRWA could then shift its mission from simply providing aid and shelter to helping Gazans build a future for themselves.

Unfortunately, the decision is not in the hands of the everyday Gazan, it is in the tenacious clutches of Hamas, who rule the Gaza Strip. I doubt that Hamas will allow this event to be the turning point in a lasting peace. Hamas has been relatively quiet since their unity deal with Fatah, but they have given no indication that they are willing to negotiate a peace treaty with Israel. On the contrary, they have reiterated their insistence on denying Israel’s existence. If Hamas maintains its terrorist credo and uses this event as a catalyst to further attacks, I don’t think anyone doubts that Israel will respond in kind, effectively destroying any benefit from the opening of the crossing.

The potential for positive change as a result of this opening is there. It’s up to the regional actors to decide whether to embrace or squander the opportunity.