During the fall, I interned for a candidate running for congress. In the end my candidate did not win and though I was sad and even furious that the opposition won, it was a done deal.There may be certain aspects of the American election process that are unclear and corrupt, we might talk with our peers about unfavorable results, but we are unlikely to revolt against it. Does this have something to do with our strong faith in our government? When looking at the responses of election processes are around the world, it is apparent that it differs drastically. People may respond with riots or revolutions and others may respond with non-violent protests. Carrying out elections does not always insure a peaceful transition of leadership. As an example, let’s look at the recent election in Malaysia.

Looking at the results of the May 5, 2013 election in Malaysia, most people would think that it was a very successful election; 85% of the people participated. In the end, Prime Minister Najib Razak of the Barisan Nasional 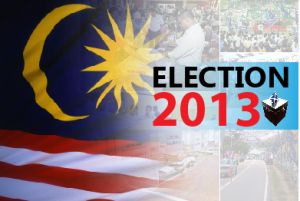 Coalition won the election. The Barisan Nasional Coalition has been governing Malaysia for 56 years. However, this result has not been fully accepted by the opposition coalition.

Anwar Ibrahim, the leader of the opposition group has accused the Barisan Nasional coalition of rigging the election process in favor of Razak, by buying votes. Ibrahim refuses to accept the results from the general election. (Ibrahim’s opposition coalition is a multiracial party consisting of the Chinese-majority party and the Islamist party that stands for equality of all Malaysians.) After the elections were held, continuous protests have been rising against Razak’s government. But why did the government go through so much effort and feel the need to (supposedly) cheat the system?

One of the reasons has to do with the policies the government is practicing. It is currently using the Bumiputera System, which is a system that favors Malays and indigenous people of Malaysia. It is important to note that 40% of the Malaysian population is comprised of Chinese, Indians and other ethnic groups, representing a significant proportion of the population. If the government is favoring a certain ethnic group, it is inevitable to have ethnic tensions between the favored and unfavored groups.

What does this all mean? Although fair and transparent election processes are important, the thing to take away from Malaysia’s election is what came about from it. Ethnic tension between Malays and non-Malays are re-surfacing and causing chaos within the country. Was it possible for this outcome to be avoided if Malaysia in fact held an election representing the will of the people? I would have to say, I don’t know, but what I do know is that ethnic issues in Malaysia is something the government needs to tackle and reform. 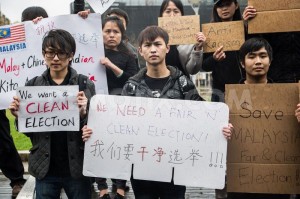 Let’s look more closely to the current issue in Malaysia. I mentioned before the government acts on race-based policies. It seems like the current government is only acting on its own self-interest. That being said how can you trust a government that discriminates against certain groups? How can you trust the election process if you cannot even trust the government? To contest against the government, the opposition group wanted to make a changes to such policies to end ethnic inequality, but to also foster economic growth. Ibrahim wanted to remodel Malaysia’s economy to increase competition based on merit, not ethnicity. Due to creation of inequality by the government, the Barisan Nasional coalition itself has been losing its popularity over the years. So this past election and the rise of the opposition coalition lead by Ibrahim was seen as a chance of social change and equality amongst the people, but the result has shown otherwise. With the undesired result of the majority and potential act of voting fraud, this election has sparked greater racial issues and animosity towards the Malaysian government.

However, the election is in the past now, so what can the country do to insure that minority groups are represented to reduce political unrest? At this point, it is up to the current government to realize the injustice in their acts and reform their policies. Citizens of Malaysia and even non-Malaysians can come together to advocate this ethnic issue so more and more people become aware of it. Hopefully in the end, the power of the Malaysian people becomes so strong that the government has no choice but to alter its policies.

What do you think the next step for Malaysia should be? I think it is important to ask ourselves, in respect to this specific election, how would we feel if election campaigns and government policies discriminated against our ethnic group and favored others? What changes can we make to guarantee ethnic equality within a country? Please feel free to comment.