It occurred to me the other day that we really ask a lot of the people who read our website. At the end of our posts we always ask you to do something to make a difference or to get involved in some way. And I personally love that about our site. But I know that can be somewhat overwhelming at times. It’s hard to imagine that an average person could change the world in a meaningful way. I know I certainly feel overwhelmed at times. But there has been an amazing story in the news recently highlighting just how much 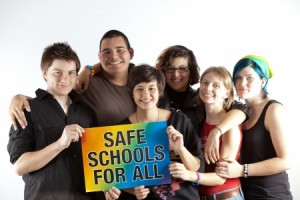 one person really can do.

That person is Bayli Silberstein from Orlando, Florida. She is a bisexual 8th grader at Carver Middle School. Bayli is openly bisexual and is attempting to start a Gay Straight Alliance in her school. Unfortunately she has a received a lot of push back from the school itself as well as the Lake County School Board. They know they cannot reasonably deny her request for a club under the current rules, so the School Board is voting soon on new rules that would restrict the number and focus of clubs within the Middle Schools in the district. But rather than accept that, this courageous 8th grader has decided to fight back against the School Board. People throughout her community as well as the ACLU have gathered to support her cause and discourage the School Board from passing the new restrictive laws.

A vote has not yet taken place on the issue. So we don’t know exactly how this situation will playout. But even if Bayli is not successful in creating her club, she has nothing to be ashamed of. Her actions have given voice to so many others who were too afraid and too bullied to speak up. She has brought attention to an issue that many people don’t think to address. And has attempted to create a safe space for ALL the people in her school. Not just certain groups of people. Even if Bayli and her supporters lose this initial vote I’m willing to bet that the new restrictive rules will not stand. Other school boards in Florida have recently allowed GSA clubs in their districts even after initial resistance to it. And the same thing will likely happen with the Lake 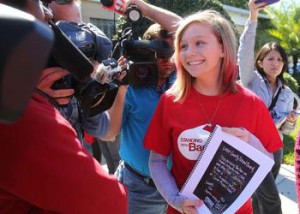 It’s a shame that we still face issues like these in today’s world. But unfortunately that’s just the reality we live in. But people like Bayli give me hope. She was brave enough to stand up and not accept the status quo. And what’s equally wonderful, people decided to stand up with her. They saw what she was doing was right and decided to support her. We really all can be changemakers. We can have a sustainable impact on society. And Bayli has demonstrated one of the best way to do that. Her GSA club will continue affecting the students at her school long after she graduates. She started the movement but happily it will continue on even without her direct involvement. But she also created an opportunity for other people to make a difference with her. She was the catalyst but this GSA club will happen because of all the people who supported her and the movement they created.

So anytime you start feeling discouraged, just think of Bayli Silberstein. She stood up against injustice. She changed the lives of the people around her. And you can too.