Imagine you’ve just been sentenced to prison. For a month, a year, 10 years, it doesn’t matter. What do you think would be going through your head? What the conditions will be like? Will you be safe from other inmates? How will you handle being confined? Can you survive without your friends and family on a daily basis? All the questions and more will likely be going through your head. And it’s a terrifying prospect.Now try to imagine experiencing all these emotions with a mental illness. Or trying predicting how you’d be able to handle what is undoubtedly an already extremely difficult situation if your brain does not work the same way as

most of society’s. A scary picture isn’t it? Unfortunately this is something that many of America’s citizens face.

As you can see there are A LOT of things we need to fix within the prison complex, particularly in relation to mental illness. People with mental illness simply need more care than other inmates. So the fact that over half of the inmates in state prisons have mental health issues is extremely troubling. In order to provide proper care for these people, more time and resources need to be directed toward their care. They need treatment, medication, and special care, which they would not receive if they were treated as the average prisoner. This isn’t to make their lives easier per se or to lessen their punishment. It is simply a necessity because they are not completely equipped 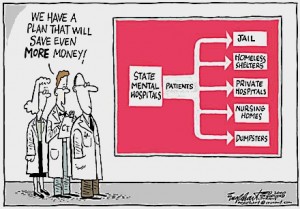 to deal with life within a prison. Therefore more money needs to be directed towards psychiatric services. 2% is quite honestly a pathetic quantity of money to spend when it comes to taking care of people’s well-being and health.

Yes, our nation is hurting economically right now. The whole country is struggling. But these inmates become the responsibility of the state when they are sentenced. Of course, they must have broken some law or done something wrong to deserve their sentence. But they are still people and they deserve to receive proper and necessary care. And for that matter it’s quite possible they broke only a very minor law but receive harsh punishment due to overly punitive laws that exist in many states, particularly California and Texas (as well as other states) with their three strikes sentencing laws. These states have made the decision to send more people to prison with these laws. That is completely their prerogative, but if they are going to make the decision to do this then they need to take care of the people they are sending. Simply put they need to allocate their budget differently in order to properly take care of people. They accepted responsibility for people’s lives and well-being when they were taken into the prison system. And they need to honor that responsibility. Even prisoners deserve proper care and a certain standard of living.

But unless states and the federal government are willing to stand up and do what’s right for these people we will continue high recidivism and suicide rates in inmates with mental health issues. I’m not saying individuals shouldn’t be punished for their mistakes or for breaking the law. But I do think people with mental health issues should receive the proper treatment they deserve. The current situation is just such a tragedy because it’s a problem that we can so easily fix. End three strikes policies. Shift budget requirements. Properly train prison workers to interact with mentally ill individually. DO SOMETHING. Because at this moment we’re not doing anything. And that simply isn’t right.