Brief Editorial Note: Some of you may have noticed that I’ve been absent from Not Enough Good for the past few weeks. I suspended my posts so that I could move to London and settle into my new schedule as an International Relations graduate student, and now that I’ve (mostly) done so I will be posting once a month.

This past Saturday, October 20th, marks the one-year anniversary of Libyan dictator Muammar 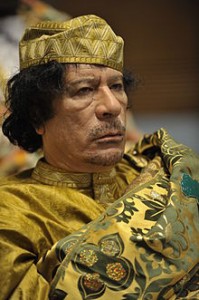 Gaddafi’s death, so I’m sure you can guess what this will be about: how Libyans are dealing with this anniversary and how the country has fared in the past year. And, just as a warning, many of the links in this post will contain graphic images, as is the nature of articles discussing Gaddafi’s death.

Libyans have been celebrating Gaddafi’s death this weekend, particularly in wake of the rumors that Gaddafi’s youngest son and militia leader, Khamis, has been declared dead (that link also contains a short video clip of Libyans gathered in Martyrs’ Square and discussing what this new turn of events means for them). The youngest Gaddafi was reportedly killed on Saturday during fighting between pro-Gaddafi forces and supporters of the new Libyan government in the town of Bani Walid, a pro-Gaddafi stronghold, though it is unclear whether he died during the fight or if he was fatally wounded and died after being captured. This is also not the first time Khamis has been declared dead, hence the “rumors” rather than outright statement of fact; Khamis was declared dead at least 4 other times since March of 2011, and in fact just three days before this latest death rumor Human Rights Watch released a report in which they stated that Khamis had been killed on August 29th, 2011, though his body was never found. Some have suggested this death rumor was started to divert attention from the shelling of Bani Walid, as the pro-Gaddafi forces in Bani Walid had complained that they are being wiped off the map and a protest was held outside the parliament in support of the town. 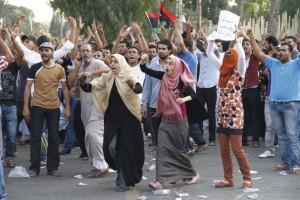 News of the death and the violent clashes in Bani Walid have largely overshadowed any celebrations or demonstrations that may have occurred to mark the anniversary of Gaddafi’s death, at least in the news, so it’s difficult to say how Libyans are feeling after their first year without Gaddafi. What is clear, though, is that the country has been in turmoil the whole year and seems no closer to peace than it was. Elections were held for the first time in July, but the new parliament remains divided and unable to agree on a new government. Bani Walid has been a contentious issue for some time now, as have the other pro-Gaddafi strongholds, including the town of Zintan, where a powerful militia is protecting Saif al-Islam, another one of Gaddafi’s sons. Criminal gangs have been cutting down trees to sell the timber, schools are struggling, the stock exchange has almost no activity, and the internet is quite shoddy. When Gaddafi was in charge the only organization not controlled by the state was the Boy Scouts, and therefore few people have any idea how to organize and govern the country.

The rough year has not dampened Libyan optimism for the future, however. The transition has been difficult, yes, but the country was a dictatorship for four decades, so it’s no surprise that it’s been a struggle to pull things together now. The fear and repression of the Gaddafi regime is over, and most 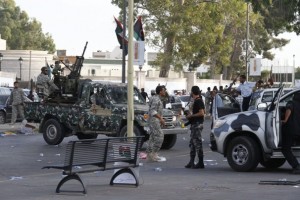 people were happy to see him (and his family) go and hope that the country becomes a successful unitary state. Hopefully the next year will bring some of the changes that the country desperately needs, and hopefully things will continue to improve after that. There’s a lot to be done, for sure: building institutions, a legal system, a successful government, the list goes on and on. The country seems to be teetering on the verge of civil war, and many of the major cities are acting more like city states than regional centers. Still, Libyans now have a sense of hope and optimism for the future that was lacking under Gaddafi’s regime.