At the end of 2010, it was reported that about seventeen million women around the world are living with HIV or AIDS. Since that was only two years ago, it is possible that number has increased even more. Awhile back, I wrote a post about implementing an integrated healthcare program that incorporates both family planning and HIV/AIDS care at one health clinic. This type of program would also benefit HIV positive women who are considering pregnancy, are pregnant or simply want to be in control of their reproductive health. There are not many health resources for women in developing countries, because of lack of infrastructure and funding.

HIV has great impact on a woman’s life, especially if the woman is pregnant. Mothers are able to pass the HIV virus to her child during pregnancy, birth, or even through breastfeeding. Mother to child transmission is often a problem in developing countries because of the lack of information available to these women. Without treatment during pregnancy, fifteen to thirty percent of infants that are born to HIV positive women are more likely to be infected with the virus. Also, five to twenty percent will be infected through breastfeeding. However, mother to child transmission can be prevented if the women have the knowledge, resources, and the healthcare. Many women do not know that transmission can be prevented, and that they can have healthy babies. I recently learned about this great organization called Mothers2Mothers. It is a non-governmental organization that developed a peer mentoring and education program for women who are HIV positive in Africa.

Mothers2Mothers selects HIV positive women from different villages who already have the experience of being a HIV positive mother. These women are further trained to be health educators and peer mentors in their own communities. The peer mentors are able to support and educate other HIV positive women who do not know about medications and what they can do to reduce the chances of transmitting the virus to their child. Peer Mentors organize group meetings and one on one meetings with pregnant women who are living with HIV. This model helps provide a simple support system for these women. The Mothers2Mothers peer mentors also help out at understaffed health clinics as well.

The best part of this program is that Mothers2Mothers is empowering women with information and resources. Pregnant women with HIV can easily connect to mother mentors because these individuals are from their own communities and are more familiar with the culture and surroundings. For women that are HIV positive, being pregnant can raise all types of fear and anxiety.

Mother mentors help reduce that fear and worry. The group meetings help create an effective support system and a open forum for women to share their views about issues such as stigma, cultural norms or healthcare. This is very beneficial because women in rural villages may not have the courage to speak up and express their opinion because of societal norms. These group meetings allow them to express their thoughts and opinions, and this can ultimately increase their self-confidence. According to a study, peer mentoring is very effective and can increase the amount of people getting tested for HIV. Similarly, mother mentors encourage moms-to-be to take their medications regularly by constant reminders. Thus, more mothers are more likely to take th 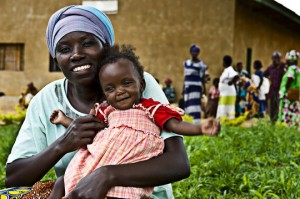 eir medications and not stop them. This helps reduce the chances of mother to child transmission.

HIV/AIDS is not only a problem within the African continent, it is also a huge problem in other continents around the world. For instance, if a similar program was implemented in a local village in India, it can really empower women there and give them the resources they need. It would be great for these women to have a support system, because it is often hard to find one for these women. Mothers2Mothers is able to provide that very support to women in Africa. It is a simple yet effective model that uses the combination of health education and peer mentoring.
Peer Mentoring is useful and encourages other women to be role models for others. The best part is that it ultimately empowers women. What do you guys think? Should these types of programs be implemented in other developing countries as well?