The Debate Over What Emergency Contraception Does Exactly?

I thought that the issue of emergency contraceptives pills (or also commonly called the morning-after pills, but referred to as ECs from here on out) was settled. I wasn’t naïve enough to think that everyone supported it, but thought that at least it was an accepted method as a preventive measure against 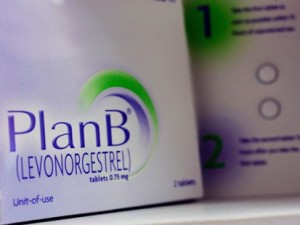 unwanted pregnancies and potential abortions. I erroneously thought that it was somewhat of a good thing for all sides of the abortion debate. Here we had a pill (or 2) that would prevent a possible pregnancy (awesome for those that are pro-choice) and, if effective, prevent the possibility of a woman becoming accidentally pregnant and potentially having an abortion (also awesome for those that are pro-life). I guess I was wrong.

Recently there was an article in the New York Times that presented evidence for two sides of the debate on whether ECs are an abortive agent. What’s interesting about this debate is that it’s based on something as simple as semantics (the wording on boxes telling how exactly the ECs work) and something as complicated as science (research shows that some forms of EC prevent the sperm from fertilizing the egg while some forms work after the sperm has fertilized the egg, i.e. conception). This confusion in information is what has fueled the life-at-conception, pro-life supporters railing against ECs. The problem at the root of it all is that research identifying the way in which ECs works is still emerging but claims have already been made (blatantly on the cover of the boxes they come in) for which there is not yet solid evidence. Thus we have controversy.

This lack of a clear answer as to what exactly ECs do in a woman’s body leads me to wonder: Where does the truth in all of this lie? What security do women really have in the drugs they rely on for their reproductive health? Most importantly, who really has women’s best interests in mind?

The answers I came up with are not so reassuring. The truth in this debate looks like is that some forms 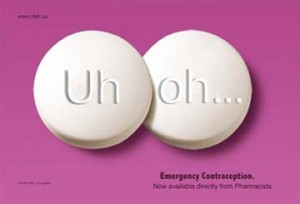 of EC are kind of like an abortion and some kind of aren’t, but we won’t really know until more research has been done. It’s outrageous that a federal agency would go ahead and allow claims to be made as advertisements on drugs that they weren’t positive about, only helping to further aggravate the issue and make women question the reliability of a drug they thought was reliable. Both sides seem reluctant to even acknowledge the evidence presented by the other side, stifling productive conversation as to the actual truth behind the entire issue of whether ECs cause abortions, just prevent fertilization, or whether some do one or the other.

So finally, who is really looking out for the women on this issue? Is it a newspaper that decides to investigate an issue affecting women? Or is it the small parties actually involved in the debate:

scientists, religious conservatives, a federal agency and conservative politicians. The important thing to keep in mind is that the implications of a small debate like this one affect everyone, female and male. Politicians are decision-makers and if you’ve been paying attention to the news within the past few years you know that contraception and abortions have come under fire at the state-level. This year is especially important for reproductive health at the national-level because in November we will elect a President. Already, issues of abortion and contraception have come up during presidential campaigning and it is obvious that the two frontrunners have very different views on these issues. These differences will likely continue to play out during the presidential term of whichever candidate is elected and ultimately will affect the lives and health of women in the US, either for better or worse.

However the debate over ECs is ultimately decided, the underlying issue is still the same: women’s right to make personal choices about their health is being undermined. Religious views  and/ or political agendas are attempting to dictate at the policy-level what women can and cannot do about their health regardless of what they think is in their best interest.

So, why do women’s health rights continue to be the subject of scrutiny and what does this mean within the political context of the US? This is something I will explore over the course of the next few months through a series of posts on ‘The Politics of Women’s Health in the US.’ This series will cover current and relevant issues about women’s reproductive health in the context of US politics and culture. Check back for more articles that will follow this post’s issues and those that continue to develop.