Islands around the world are starting to disappear, or “sink”, and the lack of attention to this issue is disturbing. Islands in the South Pacific, Indian Ocean and even the United States are starting to witness continuous rising water levels and stronger storm and tidal surges that threaten to extinct islands and have devastating effects on the lives of the islands’ inhabitants. Why is this happening? What does this mean for 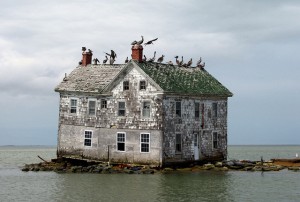 the lives of inhabitants? And, what does this mean for the rest of the world?

If you’ve heard anything about disappearing islands (Side note: the term “sinking islands” is a misnomer. Islands aren’t sinking, sea-levels are rising) you’ve most likely heard of this happening in the South Pacific. It is true that South Pacific islands like Tuvalu and the Marshall Islands are disappearing; but so is the island of Isle de Jean Charles in Louisiana, islands in the Chesapeake Bay and islands off the coasts of India and Sri Lanka. Already a number of uninhabited islands including Tebua Tarawa and Abanuea in the island state of Kiribati have already disappeared below sea levels, but so far there are no confirmed reports of inhabited islands disappearing. Much debate still remains as to the causes of islands around the world disappearing, although it is widely believed (and there is mounting evidence for this) that climate change and global warming are the primary culprits for the rising sea levels and intensifying storms that are the causes.

What I find most concerning about this issue is what this means for the people most immediately affected. What will happen to people displaced by rising sea-levels that engulf the island they live on? These people will lose their homes, lose their livelihoods and essentially become environmental refugees. Their social networks will disperse as former inhabitants search for other places to live. Traditions and cultures are threatened with the displacement of those that have lived on islands for generations. And what will happen once they do relocate? These people may not have skills viable for the economies they move into.

Take the economy of the islands that make up the Republic of Maldives as an example. This island nation relies most heavily on the fishing industry and to a much lesser degree on tourism, agriculture and traditional cottage industries (i.e. handcrafts). Maldives closest neighbor is India, which seems likely that this is the 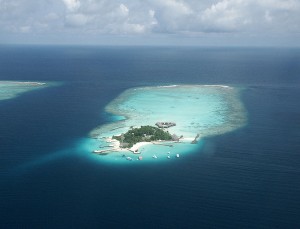 place where a majority of the Maldives’ residents would immigrate to if their islands disappear. However, India’s economy is quite different from Maldives. India’s economy relies mostly on the service and industrial sectors, industries require skills that the people of the Maldives likely may not have since these sectors are not dominant in their economy. This is the problem: the skills needed for economic sectors in the host countries not be the skills the island inhabitants possess from their work in their home countries’ economic sectors. This could make providing for themselves and their families much harder.

What about those not immediately affected, like receiving countries? Most of these islands under threat are in closest proximity to poorer, developing nations where they will likely end up as refugees. These nations, like India with its host of poverty and human rights issues, will not likely be able to support these people. What will the burden on host governments be if they need to provide more social support to these refugees? One can imagine that these refugees will not be leaving their homes with much money or property given that their most valuable property will end up under water. These refugees will enter host countries with limited resources, limited social networks and perhaps limited skills and knowledge of the country and economy for which they are entering. These factors coupled with a host country with limited support services, especially for refugees who require more care than the average citizen given their vulnerable position, makes for a challenging situation.

One of the most unfair sides of this issue that I find, a common theme among most issues of global warming, is the fact that these islands are hardly the ones doing the greenhouse gas polluting. Leading industrial nations such as the United States are mostly to blame for the causes of global warming, not the small islands 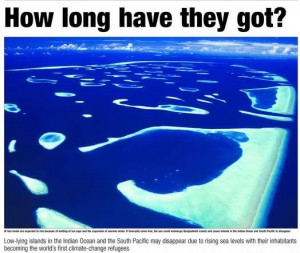 that depend on small-scale agriculture, tourism, and fishing industries. Yet, these are among the first victims of climate change and will serve as an example for all of us of the kinds of adverse effects climate change will have.

Whether these threatened islands will disappear or not, only time will tell. If these islands do disappear under water the impacts on inhabitants can only be speculated at this point. But, it is safe to say that most of these people will face hardship and poverty if this happens through relocation to foreign countries; loss of their homes, resources and livelihoods; and the dissolution of social networks. I can only imagine that the small amount of attention paid to this issue is because it immediately affects on a small number of the world’s population, the root cause of the problem (climate change) is still hotly debated, and most of the disappearing islands are their own nations charged with dealing with their own problems. But this is an issue that will continue to affect more populations and more countries within the coming years as global warming continues to increase. What kind of sustainable solutions can be developed now to prepare for these disappearing islands and their inhabitants? If so-called experts and other leaders in science and politics continue to ignore the facts and deny climate change, this will only serve to delay planning on what can be done once the islands disappear. What can be done now to prepare for these disappearing islands and their inhabitants?