I recently read a story on CNN about a community in the Mekong Delta region of Vietnam that resides in and around a waste dump. Parents and their children spend hours a day, from when they wake to when they finally go to sleep, picking through trash for items that will keep them alive- food, clothing, and other goods. The saying 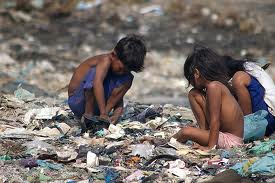 An issue outside of poverty exists in this area as well, though- human trafficking. It was reported that girls from this area were being sold into the sex trafficking arena by their own parents. The problem was that the parents had no idea what they were doing to their children. Nonthreatening looking people, often women, would come to the dump and offer around $100 for a child to “have a better life.” This person would convince the mothers and fathers that they would be providing their children with jobs and a better future by “selling” them. The parents would willingly oblige due to their desire for their children to have a future better than their own.

Obviously a number of problems are present in this situation. Not only is there sex trafficking, poverty, malnutrition, illiteracy, and so on; there is also a lack of understanding about the actual problems that persist. Parents were even trying to persuade any foreign looking individual into taking their child away from the dump, not because they didn’t want them, but because they knew that they did not have a future there.

The Catalyst Foundation spent some time in the area and decided to push toward development. They saw the kinds of problems that were running rampant in the area and realized that change was vital. While countless organizations might approach this situation by bringing in food, clothes, or books, Catalyst did something different.

“Educate a child to end the cycle of poverty” is something that you will read if you visit the foundation’s website; their goal is to end modern day slavery. The programs that they offer vary from educating the community, providing microcredit and savings, vocational training, to sending kids to school.

The first step in their plan was to “arm” the kids living in the community with cell phones; there was a distinct effort to give the girls cell phones first. This tactic was meant to provide these kids and girls with a way to contact the organization should they be taken by a trafficker. Second, the children were taught to read. The purpose? Having a cell phone to notify someone that you’ve been taken is useless if you do not know how to tell that person where you are. Teaching the kids how to read meant that they would be able to see road signs and relay the location back to someone on the other end of the line. After those hurdles were jumped, the organization taught the children to run if a stranger approached them. It’s sad that something so engrained in every child in America’s mind is completely overlooked in a place where it could save so many lives. To top all of this off, though, Catalyst then taught the parents what sex trafficking was, and where they were sending their children when they made that appealing $100 trade.

All of these things combined meant that the number of girls trafficked out of that community dropped from 37 to 4 between 2006 to 2011. Currently, Catalyst runs a school in the community, along with the previously mentioned programs.

I think that what this foundation has chosen to do is a great plan of action. They have looked at the problem from all angles and determined the best way to end it entirely. Not only is the education and support that they are providing fighting against sex trafficking, though, it is also preparing the children in the community for a brighter future. Human trafficking happens all over the world, even in the United States. It is obviously a hard battle to fight. With parents willingly giving their kids away due to a lack of knowledge and kids who don’t know when to run or say no, ending this crime will be impossible. The Catalyst Foundation has taken a much needed step in the right direction, and I believe that other organizations could benefit by doing the same.