Have you ever seen the show “What Would You Do?”.  It catches regular unsuspecting people stuck in scripted, uncomfortable social situations.  For example, the show staged a scene in the middle of a restaurant where the actors placed a bug in their sandwich when the waiter left the table and then demanded a free meal when the waiter returned.  The concept of the show is what would you do if you saw a similar situation; would you “rat” out the actor’s actions to the waiter and turn them in?  Well I have a what would you do situation…What would you do if your suburban, colonial home owning neighbor suddenly rolled up with twelve new high-end luxury vehicles in the course of a year?  Would this seem strange enough to you to say something?  Well Rodney R. Hailey’s neighbors did just that.  After the extravagant purchase of a Rolls-Royce, Maserati, Bentley, and not one, but two Ferraris, Hailey’s neighbors grew suspicious of Hailey’s claim that the funds were coming from his company Clean Green Fuel’s production and sale of bio-fuels.  One neighbor took his suspicions to law enforcement that eventually uncovered Hailey’s multi-million dollar scheme.

The selling of bio-fuel credits has become a major way policy makers try to incentivize renewable energy without crippling business.  Similar to the carbon cap-and-trade system, companies that use non-renewable energy sources like gasoline or diesel are required to also use renewable energy sources like bio-fuels.  If a company who imports or processes gasoline or diesel does not wish to also use bio-fuels they can purchase bio-fuel credits (referred to by their renewable identification number, RIN) from another company that has exceeded their required bio-fuel use.  This way, companies still have choice, but the amount of harmful non-renewable fuels is ultimately being lowered. In 2010, the world produced 105 billion liters of bio-fuels, and it is possible by 2050 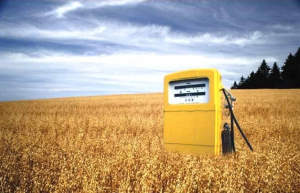 that half of all of the world’s transportation needs could be powered by bio-fuels.

Rodney R. Hailey counterfeited credits that would equate to 21 million gallons of bio-fuel from March 2009 to December 2010.  No gallons of bio-fuels ever really existed but Hailey was able to make over 9 million dollars by selling the fake credits to major oil companies in need of bio-fuel credits to reach the federal mandate.  Hailey pocketed the money made by “Clean Green Fuels” and spent it on lavish purchases like jewelry and cars.  Hailey claims he produced bio-fuels by converting vegetable oils from thousands of restaurants in the Baltimore area.  However, once the investigations were under way there were no signs of any production facilities or equipment, and I’m pretty sure one of “thousands” of restaurants would be willing to back up his story if there was any truth to it.  Nonetheless Hailey has pled not guilty to charges of violation of the Clean Air Act, wire fraud, and money laundering.

Hailey’s case leaves the Environmental Protection Agency and policy makers in a predicament.  If one person was able to make millions off of counterfeit RINs for over a year, how many other schemes like this are possible?  Fraudulent behavior among bio-fuel credit dealers poses a huge threat to the purpose of the trading program.  As Hailey bought luxury car after luxury car, these major oil companies he was selling his fake bio-fuel credits to were using just as much non-renewable energy.

As the country moves into a new era of green technology and renewable resources, more and more threats of cheating and fraud become likely.  Cases like Hailey have put more eyes and more pressure on existing bio-fuel companies.  The EPA is working with oil industry leaders and bio-fuel brokers to strategize on the best ways to ensure fairness and honesty across the system.  While non-renewable energy sources like oil become more and more scarce, innovation is necessary to power this country.  Innovation came in Dayton Florida when an engineer student at Embry-Riddle Aeronautical University suggested that the campus’s lawn mowers be powered by converted fuel from the cafeteria’s leftover oil.

As the next generation of social change leaders emerges, we need to be as forward thinking as possible.  We need to stand up for what’s right (as Hailey’s neighbors did in the “What Would You Do” scenario), and we need to act as active agents of change as Michelle Rodio did at her Florida university.  It is important we act as frequently and with as much influence as possible.  It is the up-and-coming generation that will have to face the consequences of unavailable energy resources.  We can’t wait until it’s too late.