It’s pretty easy to forget that the Arab Spring is more than just Egypt, Libya, and Syria; those three countries dominate the news, particularly Syria, while the other countries involved in the movement are largely ignored.  So today I’ve decided to devote a post to Bahrain, which has been mostly out of the media since the early, extremely violent protests back in the beginning of the Arab Spring. 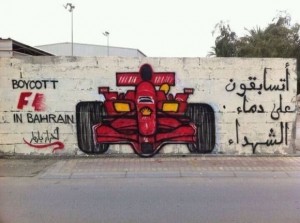 in which 35 people were killed back in early 2011, but the country is still mired in unrest and is anticipating a major protest this weekend.  The Formula One Grand Prix race is set to take place over the weekend, and activists are taking advantage of the renewed international attention on the Bahrain by planning a “day of rage.” Last year the race was cancelled in the wake of the uprising, but this year Formula One has said the Grand Prix will be held as scheduled, leading many activists boycott the race and question what this decision means for human rights and for the safety of the protesters (see video below).  Graffiti messages have popped up around the capital, with colorful slogans like “You will race on the blood of martyrs,” and thousands of citizens are turning out for opposition rallies as race day nears.

The government has already begun rounding up protesters and tossing them in jail; about 80 people identified as “protest leaders” have been arrested so far as a “preventive measure.”  One particularly prominent leader, Abdulhadi al-Khawaji, went on a hunger strike after being sentenced to life in prison several months ago for 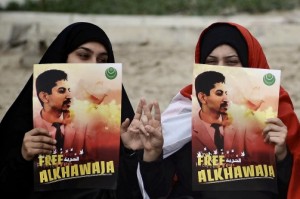 plotting to overthrow the royal family, and has gone without food for over 70 days.  The government claims he is in stable condition, but his health is certainly deteriorating after over two months without food, especially since he said he will refuse intravenous infusions.  His death would likely spark another wave of violence, as protesters and international organizations like Amnesty International and the UN have rallied around him and demanded his release.  On Wednesday the 18th 60 activists gathered to protest and call for his release, but were shut down by the police.

The royal family has more to worry about than al-Khawaja and the Formula One race, though.  Every since the violent crackdown on the protests back in February of 2011 the government has been under scrutiny from human rights groups for failing to institute comprehensive reforms and for using torture and excessive force against protesters.  The government claims to be on the road to 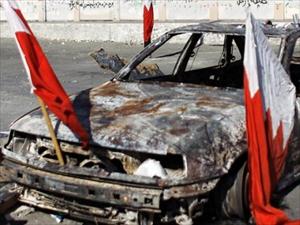 reform and government-issued reports portray attempts to uphold human rights and teach tolerance, acceptance, and dialogue in a positive light, but Amnesty International’s investigation into the matter found that recent reforms have been flawed and piecemeal. The king stated last month that “significant and broad progress” has been made, but there seems to be little substance to his claims.  It seems that the opposition movement is picking up steam again in Bahrain, and if the royal family continues to do nothing to improve the situation within the country I think it is likely that violence will erupt once more.

Now I’m going to leave you with a video of a Bahrani activist talking about the upcoming Formula One race.  Watch it and let me know what you think in the comments!  Do you think Formula One should have cancelled the race for ethical reasons?  Do you think the opposition movement is going to become more powerful and attempt to overthrow the royal family again?