In the past, I’ve discussed factors that influence obesity rates, marketing of poorly nutritious food, the need for an injection of fresh produce in certain communities, and much more. However, I have yet to specifically address the impact of physical activity on maintaining a healthy weight.

I started to think about simple ways to stay physically active during the average person’s daily routine. As I walked around my university’s campus tossing around different ideas in my head, it hit me. Why not discuss the very activity in which I was partaking in at that moment? Yes, I’m talking about walking. More often than not, technological advancements are aimed at improving convenience. Cars, trains, boats, and planes – all are useful because they make traveling long distances easy and convenient. However, this convenience leads to a reduction in physical activity. The more affordable and more prevalent vehicular transportation becomes, the less people walk.

Furthermore, urban sprawl is very common in newer cities within the U.S. Urban sprawl is largely responsible for automobile dependency and often causes more people to drive or take other forms of vehicular transportation 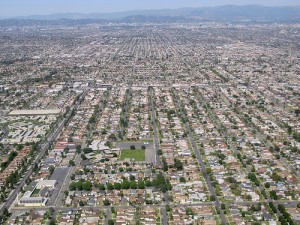 For millions of people, their average day consists of waking up, driving to work, sitting at their desk all day, driving home, relaxing and going to sleep. As you can see, this daily schedule leaves very little room for exercise and physical activity. I believe that walking can prove to be very helpful in combatting obesity rates. Statistics show a high correlation between percent of commuters who drive with the percent of people that are obese for counties within the United States. These statistics are very noteworthy, but not surprising. It is important to remember that correlation does not imply causation, however this correlation suggests a strong link between walking and obesity rates.

I personally believe that in our attempt to reverse the growth of obesity rates, we overlook obvious solutions. Eat healthy, lift weights, run, do yoga, the list goes on. However, very rarely will you hear, “go walk.” Walking to work is a very efficient use of time, in that you are staying physically active while making your necessary commute.

Unfortunately, walking to work is not a viable option for millions of Americans living in cities affected by urban 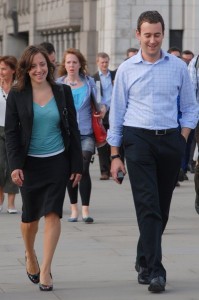 sprawl. The long distances needed to travel make walking to work unrealistic. The average traveling distance for Americans in the U.S. to get to work is approximately 15 miles. Urban sprawl’s influence on employment dispersion is commonly referred to as “job sprawl.”

Job sprawl is a major issue for numerous reasons, but in relation to health, it forces millions of people to drive rather than walk, depriving them of much needed physical activity. One study shows that urban sprawl could be associated with physical activity and health outcomes. Another notes an established correlation between physical activity and residential density. It makes perfect sense, a person is much more likely to drive to work, or anywhere for that matter, when his/her desired destinations are far distances apart.

More needs to be done to combat this nation’s growing problem of urban sprawl. Not many organizations address this issue, and one of the only organizations dedicated to fighting urban sprawl is Smart Growth America. The truth is that not enough people understand the severity of sprawl and its detrimental effects on people’s health. Therefore, I believe that organizations that are dedicated to eradicating the obesity epidemic, such as Let’s Move!, Shape Up America!, NFL’s Play 60, etc., should start to include urban sprawl in their issues they aim to fix. These organizations, as well as many others, are well-established and well-respected groups that already have earned much respect, and can be very influential in trying to combat urban sprawl. With these groups on board, the general public will become more aware of urban sprawl’s effect on our nation’s obesity rates, but even more importantly, these groups are more likely to stimulate policy change and government intervention because of their already established credibility and large followings.

I believe that this goal of garnering support from large organizations creates an opportunity for a new, smaller organization to form. This group’s goal should not be to help stop urban sprawl, but rather it should be to try to convince the large obesity-related groups to include urban sprawl in their issues they are trying to tackle. This group would need to convey the importance of eliminating urban sprawl in relation to reducing obesity rates and improving health. Its mission and focus should be aimed solely at other groups and not the general public.

I am a strong believer that walking – specifically walking to work – is a valuable and relatively untapped resource for helping to combat obesity in our nation. Unfortunately, urban sprawl creates a barrier for millions of Americans who might otherwise choose to walk to work. Current organizations involved with improving health and obesity rates should pay more attention to the importance of urban sprawl.  Once large and credible groups take this issue under their wings, then hopefully we might start to see a change in policy and government regulations.