I recently read an article on the CNN Project Freedom website about a woman from Denver, Colorado who is trying to end modern day slavery, otherwise known as sex trafficking. Kimba Langas was a stay at home mom who, like most of us, began accumulating unwanted clothing, boxed in her garage, which she packed away and soon forgot about. Over time, she realized that she had collected a fairly large amount of bras that she wasn’t really sure what to do with. She thought about donating them, but worried that GoodWill or the Salvation Army 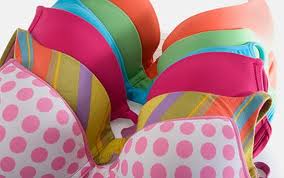 might not want or accept used bras. Instead, she decided to start sending them to women living in rural African villages.

“Free the Girls” was created by Kimba and her pastor, whom was planning on moving to Africa to become a missionary. Soon after deciding to donate all of her own bras, Kimba started running the project from her home and accepting bras from all over the country. She would then ship them or ask friends going to Africa to pack them into an extra suitcase. Free the Girls quickly picked up and gained some awareness.

The point of the project was to put an end to sex trafficking. It was thought out and decided that the donations of bras would go to African girls whom had escaped this disgusting form of modern day slavery. The idea was that the girls would receive the bras and then be able to sell them at local markets in order to make a living; the bras would be providing these girls with jobs and financial support. In theory, the project seems good-hearted and well-meaning. However, I couldn’t help but notice some draw backs.

Free the Girls ended up receiving so many donated bras that they ran out of money to be able to ship them to Africa. The donations became so many, in fact, that it was going to cost well over six thousand dollars to transport the bras. To overcome this hurdle, Kimba and the rest of the team decided that they would start putting all of their efforts into raising the $6,500. Without the money, the African girls would not be able to have jobs.

I think that Free the Girls had a good idea that has not been fully developed. Providing jobs for sex trafficking

victims will help the girls get back on their feet. Many of them, after all, have been slaves since they were kids. However, I do not think that providing them with bras to sell is the best way to go about this. I suggest the following: there is no need for any clothing to go to waste. Kimba had a good idea in gathering bras to provide to women; they are crucial and often unreasonably expensive. Simply giving them to girls, though, is not providing them with a solution to their problems. After all, these girls now have to rely on bra donations to stay afloat. If for some reason those donations do not come through (because of shipping costs, perhaps), the girls are back to square one. Instead of raising $6,500 to ship the bras, why not give them out to women in the United States, where the project is based, who cannot afford them? Like I said, I do not think that clothing should go to waste, and I have no doubt that there are countless women much closer to Kimba who would appreciate a bra. Secondly, rather than raising thousands of dollars to ship bras across the ocean, why not raise that money to provide the girls with job training? Instead of having to rely on someone on the other side of the world, they could be empowered to control their own future.

While I do support Free the Girls for their vision, a slavery free world, I do not see how enabling African girls to sell bras will help to reach that. Ending sex trafficking will take education and empowerment. Providing women with job skills and training will set the stage for increased awareness and knowledge of what their pasts were like, and potentially move us one step closer to a free world.