The United States has enacted numerous laws that protect its citizen’s right to choose. People may disagree with another’s choice, but that does not matter because they still have rights. The Freedom of Religion, for example, allows Americans to worship whichever God they choose, disbarring any repercussions.

Imagine if, as an American, you were only allowed to practice one religion- Buddhism, perhaps, even though you had grown up learning about and praying to God and Jesus. You feel a strong connection to the teachings of Jesus and the miracles you were told he performed; you live your life by him. What would you do? Would you still worship your own God, and what would happen if you did? The consequences are endless. You might be antagonized, segregated, refused assistance in public places, have your property vandalized, or worse, killed. All of these things and more could happen to you simply because you wish to make your own choice regarding the God you worship.

Now, picture falling deeply and unendingly in love with someone, only to be told that you cannot marry them. You’re committed to this person, you will care for them through thick and thin, but someone you have never seen before is preventing you from making the promise of marriage. Would that bother you?

Same-sex marriage is only just becoming legal in some states. In most, however, the 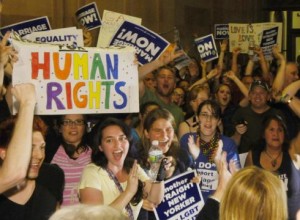 law prevents it. The law says that marriage is strictly between one man and one woman. It does not, however, say that religion is between one man and Jesus, or one man and Allah. If our freedom to make choices is not harmful to others, if it is for our own personal benefit, why does it matter? If I were to marry my girlfriend, would I be ending your heterosexual marriage? I would hope not.

Some readers might be skeptical of what I’m saying. The fight for marriage rights should be based on the fact that being gay is not a choice, right? Well, what if we took another approach? What if we simply fought for equality based on the fact that we are all human beings with the capacity to make educated choices of our own? Why do we have to continue trying to convince people that being gay happens at birth, when we technically do not have evidence to support that?

Recently, Sex in the City actress, Cynthia Nixon, told New York Times that becoming a lesbian was a choice that she made after 15 years of being married to a man. You can imagine the uproar her comment saw from people of the LGBT community who have been endlessly fighting to convince people of the exact opposite. People were outraged from thinking that she had basically made a mockery out of so much past activism efforts.

Regardless of how I feel about her comments, I’m not going to talk to you about my own opinions on the matter of choice or non-choice. The point I’m trying to make is that I do not think it should matter in our fight for equality. After all, how many times in the history of our world have people been put through discrimination and even genocide because of physical appearances, something they were obviously born with?

I believe that LGBT supporters should not let the infinite debate of whether or not being gay is a choice get in the way of their efforts in gaining equality and rights. We should focus on the facts that we have, the proof that we can show, to make our hard work pay off in greater amounts. The statements we should be making are not that we should be equal because we were born a certain way and had no control over it. The point we should be making is that “human rights” are just that- rights for all humans, regardless of race, sexual orientation, or religion. Let’s substantiate our cause and make this fight worthwhile.